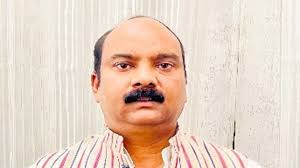 Shahjahanpur District Court on Wednesday declared Bharatiya Janata Party's Lok Sabha MP Arun Sagar absconding. He is accused of painting on the wall without the permission of the administration during the last Lok Sabha elections.

The Special Public Prosecutor of MP-MLA Court said on Wednesday, “Arun Sagar has been declared absconder in a case of bringing election material without the permission of the concerned authority during the 2019 Lok Sabha elections. He was repeatedly asked to appear in the court but he did not appear. In the same case, earlier a non-bailable warrant was issued against him as he did not appear in the court.

In 2019, on March 12, the then Deputy Collector Sadar / Assistant Returning Officer 136 Vidhansabha constituency Dadraul Ved Singh Chauhan was visiting. He saw the propaganda material of the then BJP candidate Arun Sagar on the Bareilly-Jalalabad road in village Rasulapur under Cantt police station area. This publicity material was put up without the permission of any competent authority. On his Tahrir, charges were registered in Kant police station. Since then the case is going on in the court.