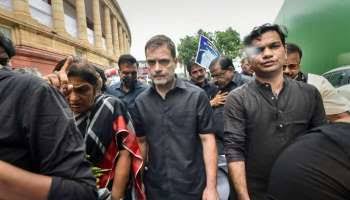 Congress was protesting against inflation today. While going for the gherao of the PM residence, many big leaders of Congress including Rahul, Priyanka Gandhi were taken into custody by the Delhi Police. However, Rahul Gandhi and Priyanka have been released from custody. Delhi Police had detained Rahul Gandhi and Priyanka Gandhi at Kingsway Camp Police Lines in Delhi. Let the Congress demonstrate in black clothes. BJP is raising the question why Congress chose August 5 as the day? Home Minister Amit Shah said that the Congress has deliberately chosen this day. Shah said that the Congress demonstrated in black clothes to show its opposition to the foundation stone laying of the Ram temple.

Uttar Pradesh CM Yogi has also condemned the Congress's demonstration in black clothes regarding the Congress's protest. Yogi said that why did they protest on the day of Ayodhya Day? He said that the real conduct of Congress has been exposed. Congress should apologize to Ram devotees. Yogi said, "Till now Congress was protesting in simple clothes but today they protested wearing black clothes. This is an insult to Ram Bhakts. They chose Ayodhya Day for their protest today which marks the beginning of construction of Ram Janmabhoomi. Is." Yogi further said, "Such acts of Congress party have insulted the faith of India. The attitude of Congress has insulted India's democracy and judiciary as well as insulted Ayodhya Day. We condemn such acts of Congress. We do."