According to the information received, there were about 20 people in the boat and illegal sand was being transported from one place to another through this boat. 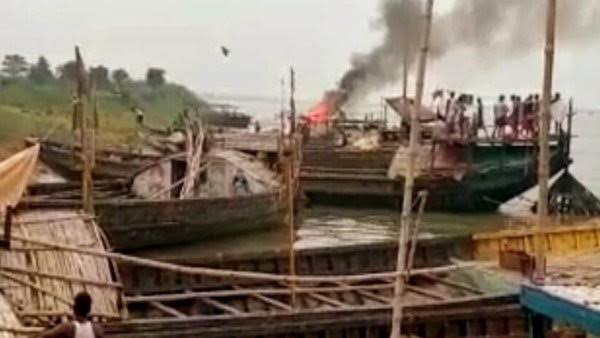 Cylinder blast occurred while cooking in Patna, Bihar. In this sudden blast, 4 laborers have died on the spot. The bodies of the dead laborers were badly burnt in this accident. The matter is of a boat in Rampur Patila Ghat of Maner, Patna. According to the information received, there were about 20 people in the boat and illegal sand was being transported from one place to another through this boat.

During this time, food was also being prepared for the people on the boat itself. During this, the gas leaked and the cylinder exploded. In the middle of the river, 4 laborers were burnt to death in this blast. The station president of Maner has also said that 4 people have died. Many people have also been injured in this accident. The injured have been admitted to the nearest hospital.

Due to this sudden accident, there was a stir in the surrounding area and as soon as the information was received, the police reached the spot. Police have taken the bodies in possession and sent them for post-mortem. In Bihar, in July last, there was an accident in a firecracker factory. The incident took place in a firecracker factory in Khodaibagh village of Chhapra district. Six people died in this accident and a part of the building also collapsed.

Another case has come to the fore from Pagra village of Vijayipur police station area of ​​Gopalganj district. Here an uncontrolled tractor killed a 50-year-old bike rider. Police has taken the body in its possession and sent it for post-mortem and has started investigating the matter. The deceased has been identified as Nebu Lal Verma, a resident of Kodvaliya village.