Bihar News: 11 people were shot in Bihar, BJP opened a front against the incident

Vehicles are being checked in many areas. In this case 7 policemen were suspended. Begusarai SP has taken action by taking a tough stand. The SP has suspended 7 policemen. 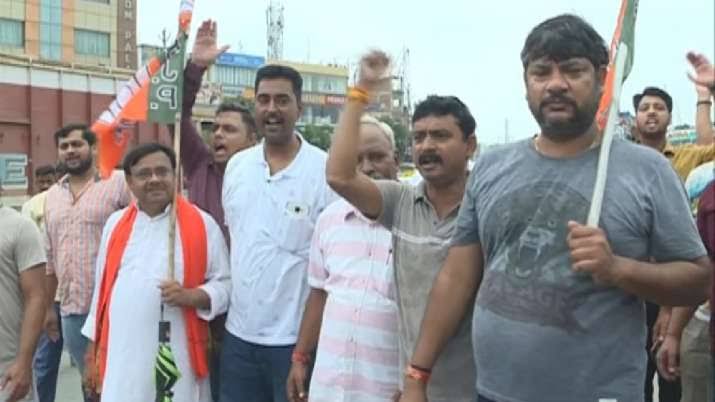 After the incident of shooting 11 people on a bike by two miscreants on a bike in Begusarai district of Bihar on Tuesday evening, now the politics of Bihar has become hot. Meanwhile, BJP has called Begusarai BND on Wednesday. Begusarai MP and Union Minister Giriraj Singh has targeted Chief Minister Nitish Kumar, calling the state 'Jungle Raj'. Begusarai SP has taken strict action in the matter. The SP has suspended 7 policemen.

One person was killed, while 10 to 11 people were injured in the firing incident by two people riding a bike in different police station areas of Begusarai. Union Minister Giriraj Singh, who reached Patna in order to go to Begusarai, said, "Unfortunately, there is no such thing as government in Bihar. The definition of Jungle Raj in Bihar has been changed, now it is called Janata Raj. going." "The Chief Minister is afraid that the day he will say Jungle Raj, the Deputy Chief Minister will remove him from power," he said.

He said that when criminals become fearless, incidents like Begusarai happen. For 30 km through four police stations, criminals pass through the road without any restrictions, open fire fearlessly, the thing called fear has ended. The BJP leader appealed to the Chief Minister to come forward and crack down on the criminals on the basis of morality. He also said, "Whatever step you have taken for ambition, then it has to happen, where should the Acacia tree be planted."

Meanwhile, the BJP has called a Begusarai bandh on Wednesday. The effect of the bandh is also visible since Wednesday morning. Vehicles are less visible on the road. Here, the nearby police station has been alerted for the arrest of the criminals. Vehicles are being checked in many areas. In this case 7 policemen were suspended. Begusarai SP has taken action by taking a tough stand. The SP has suspended 7 policemen.