Big success of Delhi Police, man arrested for fraud more than Rs 100 crore, was looking for in 59 cases

Eventually, on the basis of intelligence, the Delhi Police arrested the accused. The arrest of Oma Ram is considered a major success of Delhi Police. 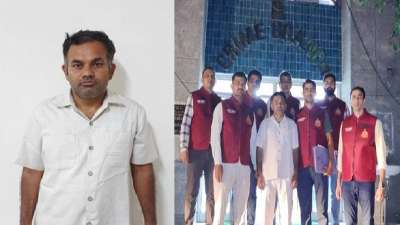 Delhi Police has got a big success. The Crime Branch of Delhi Police has arrested a person in the case of fraud of more than 100 crores. The accused was wanted in 59 different cases. The name of the accused is Oma Ram and he is a resident of Jodhpur. In many cases of fraud in Rajasthan, the police were looking for Oma Ram.

Delhi Police Crime Branch got this information that Oma Ram is going to come to Rohini to meet some of his information. On the basis of this information, the police arrested Oma Ram by raiding. The arrested man had worked as a cook in the BSF between 2004 and 2006. During interrogation, he told the police that he left the job of a cook in BSF so that he could do something that would make him rich.

In 2007, he opened a security agency in Jaipur. He recruited 60 employees. After this gradually he formed many companies and kept on cheating people. His company used to pay commission on the addition of new members. Thousands of people joined his company as members and they invested money. In the year 2011 a large number of criminal cases and criminal complaints were registered against the company in Rajasthan.

After this he went to Indore and started doing some business there too but the business could not settle down. In the year 2014, he moved to Delhi and started dealing in property. Eventually, on the basis of intelligence, the Delhi Police arrested the accused. The arrest of Oma Ram is considered a major success of Delhi Police.