Biden, President of US to meet PM Modi for mutual talks on margins of Quad

President of US meets PM Modi for talks on the margins of Quad. 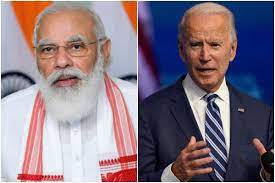 Joe Biden, US President will hold mutual talks with PM Narendra Modi on the margins of the Quad meeting in Washington on Friday, which the White House revealed on Monday. Biden will meet separately with Japan’s PM Yoshihide Suga.

The bilaterals are expected to give clarity among other things on the new AUKUS alliance involving the UK, Australia, and the US, aimed at countering China’s growing influence in the Indo-Pacific region. Australia’s PM Scott Morrison is the fourth leader in the first-ever in-person Quad meeting which will take place on the same day itself.

India's ties with the US have grown stronger over the past 25 years across successive governments and administrations in both countries.