The talks offer an opportunity for the Democratic President, who took office in January, to build on his promise to strengthen US alliances that had frayed under his Republican predecessor, Donald Trump. 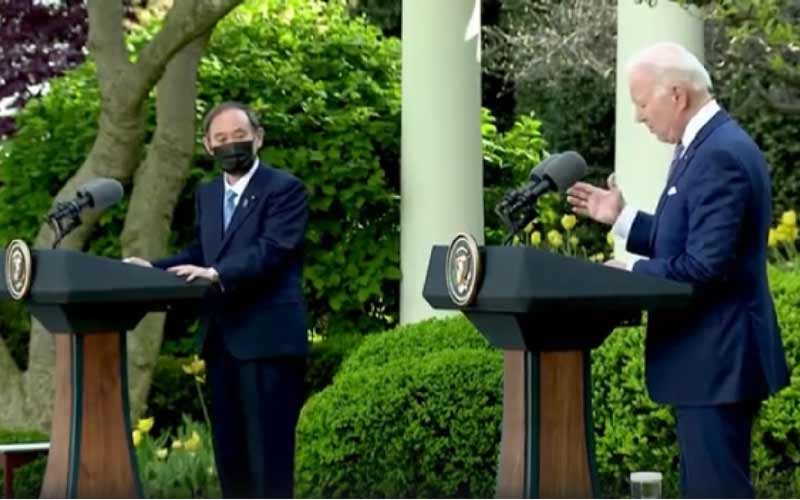 The talks offer an opportunity for the Democratic President, who took office in January, to build on his promise to strengthen US alliances that had frayed under his Republican predecessor, Donald Trump.

China was at the top of the agenda, emphasising Japan's central position in US efforts to counter Beijing. Suga confirmed the two leaders reaffirmed "the importance of peace and stability of the Taiwan Strait," a jab at Beijing's increased military pressure on the Chinese-claimed, self-ruled island.

"Today, Prime Minister Suga and I affirmed our unwavering support for the US-Japanese alliance and our mutual security," Biden said at a joint news conference in the White House Rose Garden, calling the talks "positive." "We committed to working together to meet China's problems and address concerns such as the East China Sea, the South China Sea, and North Korea in order to ensure the future of a free and open Indo Pacific."

Other pressing issues discussed at the talks were China's increased military movements near Taiwan, its tightening hold on Hong Kong, and its crackdown on Muslim Uighurs in Xinjiang.

Suga said that he and Biden agreed on the importance of candid discussions with China in light of Beijing's actions in the Indo-Pacific region. The summit, which marked Biden's first in-person meeting with a foreign leader as President, came only days after China dispatched 25 aircraft, including fighters and nuclear-capable bombers, to the vicinity of Taiwan, which Beijing regards as a rebellious province.

In a joint report, the leaders emphasised "the importance of peace and stability across the Taiwan Strait and encouraged the peaceful settlement of cross-Strait issues," similar to language used by both countries' foreign and defence ministers following a meeting last month.

It was the first time the topic had been mentioned in a joint statement by the US and Japanese leaders since 1969 before Tokyo normalised relations with Beijing. Provided a warning in Tokyo about the need to balance security issues with Japan's deep economic relations with China, attention had been centred on the topic's wording.

In another poke at China, Biden said at the news conference that the US and Japan will collaborate on projects such as 5G, artificial intelligence, quantum computing, genomics, and semiconductor supply chains.

According to the joint statement, the US has pledged $2.5 billion and Japan has committed $2 billion to boost digital competition, both in 5G and beyond 5G networks.

"Both Japan and the United States are heavily engaged in creativity and looking forward," Biden said. "This involves investing in and protecting innovations that will help us sustain and sharpen our competitive edge." As per Zhao Lijian, a spokesman for China's foreign ministry, China has expressed grave concern about "collusion" between Japan and the United States, and the countries should take China's concerns seriously.

Suga apparently told a Washington think tank that Japan would say what needed to be said to China and speak out on human rights issues, while also emphasising the importance of establishing a secure, positive relationship with Beijing.

In a joint statement, the leaders said they "share serious concerns" about the human rights situation in Hong Kong and China's Xinjiang region, where Washington has accused Beijing of genocide against Muslim Uighurs. China has denied any wrongdoing.

Japan has been rebuked for failing to take stronger action against suspected human rights violations to avoid a backlash that could damage its companies doing business in China, its largest trading partner.

Suga said at the White House press conference that he told Biden that he was committed to going forward with the summer Olympic Games in Japan and that Biden expressed his support. With less than 100 days before the scheduled start, Japan is dealing with an increase in coronavirus infections.

"I told the president about my commitment to make the Tokyo Olympic and Paralympic Games a sign of global solidarity this summer," Suga said.

Biden, Suga, and their two delegations all wore masks as they sat down for talks, following protocols designed to prevent the spread of COVID-19.

After four years in which Trump chastised allies in Asia and elsewhere for what he saw as inadequate defence spending or support for U.S. troop presence, and challenged the importance of bedrock military alliances, Biden seemed determined to start started on the right foot with Suga.

Biden hopes that the Suga conference, as well as another scheduled summit with South Korea in May, would reenergize joint efforts with Australia, India, and Japan in a coalition known as the Quad, as well as with South Korea, to battle China and longtime US foe North Korea.

On the other hand, China is vehemently opposed to the joint statement released by the US and Japan following talks between the two countries' representatives, according to a statement issued by China's embassy in the US on Saturday.

Taiwan, Hong Kong, and Xinjiang are internal Chinese affairs that should not be interfered with, it said, adding that the talks had gone beyond the limits of normal bilateral relations, damaging third-party interests and disrupting regional peace and stability.