Referring to his address given at a public meeting in Hoshiarpur recently, Rahul Gandhi said, “I told Bhagwant Manji not to let Punjab be governed by remote control. I have not said anything simple. 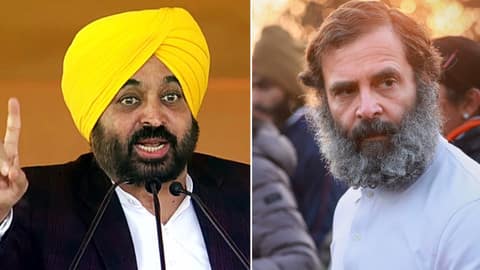 Congress leader Rahul Gandhi on Thursday once again targeted the AAP government in Punjab, alleging that it was being run by remote control. Addressing a rally here on the last leg of Bharat Jodo Yatra in Punjab, Rahul Gandhi said he respected Chief Minister Mann but Punjab should be governed only from Punjab and not from Delhi. Referring to his address given at a public meeting in Hoshiarpur recently, Rahul Gandhi said, “I told Bhagwant Manji not to let Punjab be governed by remote control. I have not said anything simple.

He said, “You are sitting with me in the Lok Sabha (when Mann used to be a Lok Sabha member). There is a lot of difference between you and Arvind Kejriwal ji. I respect you and I am saying this from the platform of Congress party. But Punjab should not be governed from Delhi. Rahul Gandhi said that during the visit he asked a farmer about the new AAP-led government in Punjab. The Congress leader claimed that his reply was that it was a government run by 'remote control'. When I asked the farmer the meaning of remote control, he said (AAP MP) Raghav Chadha.

The Punjab leg of 'Bharat Jodo Yatra' is coming to an end on Thursday and now the yatra will enter Jammu. The yatra began on September 7 from Kanyakumari in Tamil Nadu and will end on January 30 in Srinagar with the unfurling of the tricolor by Rahul Gandhi.