Best Wishes Pour In for the Indian Paralympic Squad At The Send-Off Ceremony, Athletes Participated Virtually As They Are In Bio-Bubble

The Tokyo Paralympic Games, scheduled to be held between August 24 and September 5. India will start its campaign on August 27 with men’s and women’s Archery events.Thangavelu Mariyappan, Rio 2016 Gold Medal winner, will be the flag bearer of India. 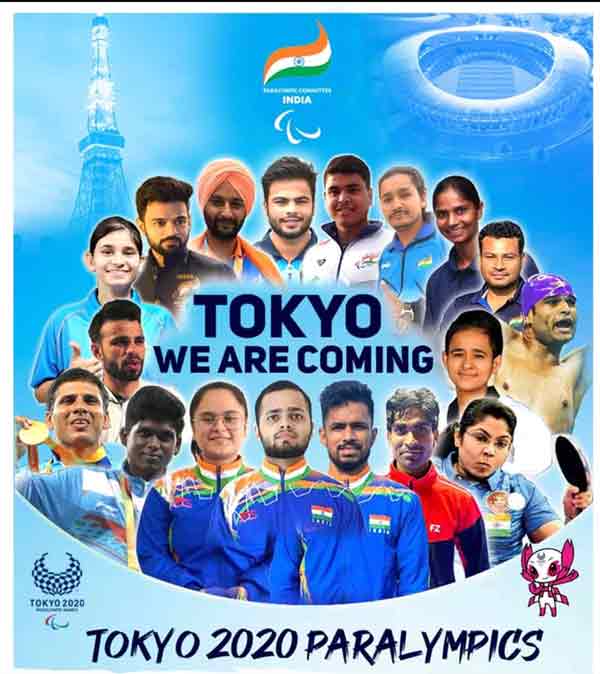 New Delhi: The Paralympic Committee of India, on Thursday, organized a grand send-off ceremony for the Tokyo-bound Indian Paralympic contingent at Hotel Ashoka. Interestingly, neither athletes nor Anurag Singh Thakur, Union Minister for Youth Affairs & Sports were present at the ceremony venue, maybe, for different reasons. The Tokyo-bound players were part of the event virtually as they are in a strict bio-bubble. They got the opportunity to interact with the Ministers during the send-off function and could feel the fervor and enthusiasm. Anurag Thakur, who gave a video-recorded message for the contingent,  was hopeful that this time the medal tally would be much better than the Rio 2016 Para Games. “Our players are already winners. Our PM is one person who takes a lot of interest in the development of sportspersons and he has requested all players to perform to the best of their abilities and not be under any pressure,” he said,

In High Spirits and best wishes, the send-off ceremony was attended by G. Kishan Reddy, Minister of tourism, Meenakashi Lekhi,  Minister of State for External Affairs, Member of Parliament Sh Krishan Kapoor along with Gursharan Singh, Secretary-General of PCI and Deepa Maik, President PCI and other office bearers of the Paralympic Committee of India.

The Tokyo Paralympic Games, scheduled to be held between August 24 and September 5. India will start its campaign on August 27 with men’s and women’s Archery events. Thangavelu Mariyappan, Rio 2016 Gold Medal winner, will be the flag bearer of India while Mr Gursharan Singh shall be the Chef de Mission of the Indian team. Badminton will make its debut at the Paralympic Games, which will feature as many as seven Indian shuttlers. Indian fans can catch all the Live action of the country's para-athletes during the upcoming Paralympics with the Paralympic Committee of India awarding the rights to broadcast the Games to Eurosport India.

This time a record number of 54 para-athletes in 9 different divisions are participating in the Tokyo2020 Paralympic Games. This time the Paralympics contingent is confident to make it one of the most successful campaigns for the country as many of the athletes are already in the top rankings in their respective event category. Though the time has been tough due to the Covid pandemic, the Paralympic Committee of India, with the help of different chief coaches, put together a schedule that has brought the athletes in the best of shapes, not only physically but mentally too.

Amidst loud cheers, claps and a lot of enthusiasm the dignitaries showered their best wishes for the Paralympics-bound contingent and hoped that they shall surpass the Rio 2016 Games’ tally of 4 medals. India had its best-ever performance in the last Paralympic Games held at Rio and finished the campaign with a high of two gold, one silver and one bronze medal.

G Kishan Reddy, emphasized the importance of sports in the plan of the Modi Government and stated that “We have tried to not leave any stone unturned in the preparation of our athletes and we are expecting the most successful Para Games of the country.”

Avinash Rai Khanna, Chief Patron of PCI, said the country is witnessing a Para Games revolution and in near future, we will be the powerhouse of Para sports. “A lot of schemes and a lot of initiatives given to the players now and hence we can see the result in front of us.,” he added.

Meenakashi Lekhi, Minister of State for External Affairs, said “We are approaching the 75th year of our Independence, our para-athletes are our real power. We are giving you a warm send-off but this is not done, we will be ready to welcome you back when you come with a great performance.”Gursharan Singh, Secretary-General of PCI, “ This is the first time that Para Games will be shown LIVE on two sports channels and we are happy to have EUROSports and DD Sports on board. People of the country can see LIVE action of our para-athletes and celebrate and enjoy their medal-winning performance.”

Deepa Malik, the President of PCI, who had won a silver medal at the Rio2016 Games, says, “The games will not be the same again after the Tokyo2020 Paralympics. We are going to see a record haul of medals as our athletes are in prime form.”