Bengal Results decoded: A tigress cannot be tamed with ‘cat-calls’ 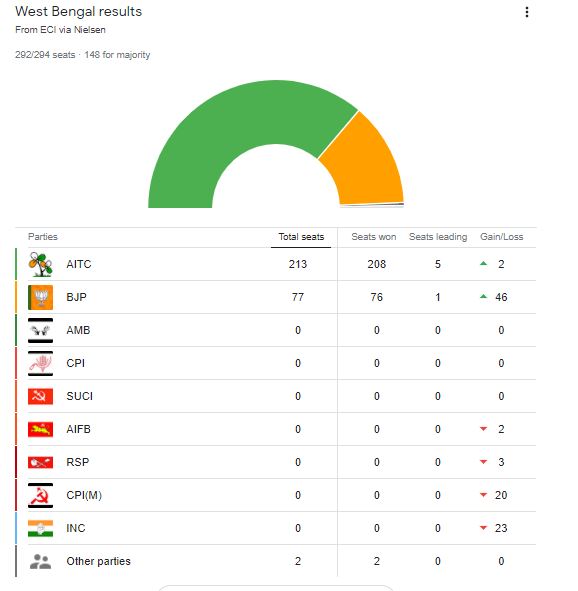 Congratulatory messages have been ringing in from all over the country on the phones of the AITMC leaders and particularly Mamata Banerjee who single-handedly took her party to third consecutive Assembly elections win. They have made it really big winning / leads in 214 seats – a difference of around 140 seats between the Trinamool Congress and the biggest contender - the BJP – which was claiming that they will win more than 200 seats in the 292 seats which went for the polls.

There will be long term repercussions of this victory. Many political parties which were thinking that BJP was invincible will shed their attitude looking at the routs in Bengal, Tamil Nadu and Kerala that the saffron party has suffered and the next big elections in Uttar Pradesh will present a much different and much more energised opposition which will jump into the arena with a will and trust that they will win.

Also, there will be major change in the numbers in Rajya Sabha and also a coalition of secular forces which will now want to change the central government. Even Mamata will be one of those projected to take on a more Central role in Indian politics.

After dissecting the results we have found the following to be the reasons which have created this momentous win for the ‘iron lady’ that many call Mamata Banerjee.

The role of Minorities

Even though they had many secular options (including the left and Congress) and at least 2 political outfits which were openly wooing only minority votes like AIMIM and Indian Secular Front – they stuck with the tried and tested Trinamool Congress and voted as though there were no options for them. For her bit, Mamta gave a huge number of assembly seats to the candidates who hail from the minorities and most of them won. A redux of what happened in Delhi when the minority community voted en-masse for Aam Aadmi Party and reduced the BJP to a paltry single digit number.

A good leader is one who gives specialised work to experts and reposes their faith in them time and again. An educated, well-read and cultured Mamata similarly engaged Prashant Kishor and his organisation to take care of the problems which were plaguing her party and in wake of such adversary which has bag-fulls of money and central machinery, a pliant Election Commission and the lapdog media this proved to be the right action, taken at the right time.

Let’s be point blank –this was a pro-Mamata versus an anti-Mamata elections in Bengal. There was an anti-incumbency wave against Trinamool Congress in some pockets (and not a saffron wave). Mamata personally is not considered stained by any corruption charges. It was the local satraps whom Mamata blindly believed in – who were the main culprits of the corruption or those who indulged in violence, because of whom Mamata could have lost.

BJP in its need to woo established MPs, MLAs or Councillors through coveted positions, through ED/CBI arm twisting or through money power – welcomed these turncoats. Most of these were the very same Trinamool satraps who were the ones against whom the locals had a grudge. These turncoats left and sided with the majority religion appeasing party, a mistake that have cost them and their party dearly.

These turncoats many of whom AITMC wanted to do away with were the people who indulged in corruption and /or were the violence mongers. Most of these including Jitendra Tiwari, Dipak Halder, Rabindranath Bhattacharya, Biswajit Kundu, Sonali Guha, Swarala Murmu, Jattu Lahiri, Rajib Banerjee, Baishali Dalmiya, Arindam Bhattacharya, Saikat Panja, Diptangshu Chowdhury – all lost, with the minority exceptions of Suvendu Adhikari, Mukul Roy, Mihir Goswami and Partha Sarathi Chatterjee.

Taking the Bull by the horns

Most political outfits in India with an exception of BJP are aggressive election players. BJP has time and again shown that they are big election contesting machine. Backed by the organisational support of RSS parivar, their central ministers (who shun their primary work for electioneering) and big money - they usually bulldoze all opposition into submission. But very few political leaders are like Mamata who stood her ground and roared against the intruders in her bastion.

A case in point, she choose to fight from Nandigram – a seat which according to the present information – she has lost. But if she would have chosen an easier assembly seat for herself – it would have sent a signal that she was not sure of her party’s win (and her own). Such a scenario would have cost her party dearly and an opening for the opposition. She took the big decision and even though she lost – her party won.

Mamata has been a vocal political leader, well connected with the common man – many call her a street fighter. With such an image, Mamata has always tried to dare or defy such actions only that she can fulfil and no one can challenge her for uttering empty words. When encountering a set of people who show pipe-dreams and have time and again been caught for their hollow promises she won hands down.

On the other hand this was one of the biggest mistakes BJP did. Bengali Manus has always been guarded when it comes to anyone making tall promises. They would rather put their savings in a bank account than in stocks and debentures. Schemes which talk about ‘great returns’ make them uncomfortable and they start suspecting them intrinsically. The same is the case for tall promises.

Bengal’s local were seen questioning peers why hasn’t yet a ‘sonar bihar’ or a ‘sonar UP’ happened and how then will ‘sonar bangla’ unfold after BJP comes to power. Even though they wanted a change they were contemplating of why to side with a party which is only good at promising and not delivering at places where it is already in power. Added to it the deteriorating law and order scenario, especially in relation to crime against women in UP, MP or Bihar, further created a problem for BJP.

The role of Women Voters

The cat calls like “Didi – O – Didi” or “ussko ukhaad phekenge” or “aami Cobra” or “she was showing her lower limbs while nursing a fracture” – has touched women in Bengal. They are not used to teasing or molestation in the state. They don’t like them to be demeaned – more so from outsiders. Women are free to travel anywhere in the state even at 2 am in the night. They are empowered – at least as much as the menfolk, if not more. In such a scenario when someone calls out bad words for your aunt, mother or ‘didi’ – the women as well as the men in the state came together to show them their true place.

Many were disgusted with the way that outsiders could make cat-calls and run away with it. They hit those who made such comments or noises with their ballot choices. This might be one of the major reasons that the state saw high electoral turnout and most probably why the womenfolk of the state cast their ballot one-sidedly in favour of the only sitting women Chief Minister in the country.

The role of usage of religion based polarisation

BJP thought that Bengal too like the Hindi heartland had a deep communal divide which can be easily fertilised and they could become the dominant force in the state. But they forgot that even though Ram has not been at loggerheads with Durga or Kali but Ram is still an ‘alien God’. Ram Navami was being made the most important festival in the last 5 – 6 years which was virtually non-existent earlier (pushed by Hindu Rightist Forces and big money) but it couldn’t muster as much groundswell as a Durga Puja, Kali Puja, Vishwakarma Puja or even a Saraswati Puja does in Bengal, which are celebrated by all citizens irrespective of their religious affiliation. In reality Bengali people have never been communal to the degree that they will vote based on communal lines.

Also, it is said that culture is bottom-up in Bengal and not Top-down as in most of India. Villagers have happily co-habited with their co-religionists and even with their neighbours who professed different religious faith than theirs. Historically, Caste and Religion has not been the guiding force while voting in Bengal – henceforth too this will be the case – except for those already bitten by the Communal virus.

Mamata Didi on the other hand showed her true secular credentials and when pitted against a majority religion appeasement policy this secular all-inclusive democratic stance of her helped her win big time.

Ultimately, a perception crept in the locals that the spread of Corona Virus was due to the very high electioneering in the state. Many were seen openly saying that the 8-phase elections which was designed by Election Commission to favour BJP has been playing havoc with their co-citizens in the state. They hence, in a bid to teach the culprits a lesson, voted against BJP. The election results also show that the ballots were casted against the Hindu appeasing party in the last two phases big time.

This maybe the first but not the last elections which will be like a referendum on the lackadaisical manner in which the central government took towards the spread of Corona Virus – be it the 80 lakhs who participated in the Kumbh or the lack of oxygen in most parts of the country or the rather lukewarm ways of social distancing during the electioneering or the bad governance vis-à-vis medical facility creation in the wake of Corona Virus pandemic in the country.