Beat Up Officials With Sticks If They Don't Listen: Giriraj Singh

Prior to this “advise” he wooed the public saying, “You have voted us to power and this position. So your complaints should be heard by your MPs, MLAs, village mukhiyas, DMs, SDMs, BDOs. 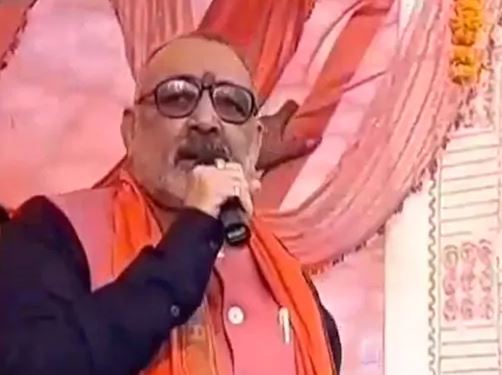 Controversy seems to be his second name. And his statements have always embarrassed his party. This was repeated today when Giriraj Singh, the BJP Minister of Animal Husbandry, Dairying and Fisheries, from Begusarai Lok Sabha constituency in Bihar, said, “Beat them up with bamboo sticks”!  Singh was referring to officials like “MPs, MLAs, village mukhiyas, DMs, SDMs, BDOs...” while addressing a function organised by an agriculture institute in his constituency.

Prior to this “advise” he wooed the public saying, “You have voted us to power and this position. So your complaints should be heard by your MPs, MLAs, village mukhiyas, DMs, SDMs, BDOs. I don’t want a strip-dance in the public in name of such complaints. They are all under obligation to serve the people. If they do not listen to you, pick up a bamboo stick with both hands and give a humiliating whack their head”, triggering laughter, giggles and clapping from the public while the ‘respectable position holders’ on the dais, fidgeted in their chair.

The minister uttered it with reference to complains that he has heard come from the public pleading they are not heard on even small complaints that require tiny efforts to resolve.

"If even that does not work, then Giriraj shall throw his weight behind you," he assured, prompting further applause from the amused crowds.

Making such evoking statements is nothing new for this minister. He has a record of making such public declarations. He is also known for his irresponsible remarks against minority communities, especially Muslims.

In April 2016, he had said that the Hindus should produce more children to increase their population in India. He allegedly had urged women to produce no less than four children to swell the Hindu population assuming Muslims have more children and it is dangerous for the country. In the same year he also had said all the religions must produce same number of children for “population control.”

He again raised a controversy in January 2020 by saying that Indians eating beef outside the country was "a matter of concern". He had come up with a suggestion of teaching Hindu religious texts in schools.

In February 2020, he made anti-Muslim remarks by saying that spaces like the Deoband in UP and Shaheen Bagh in Delhi -- the protest site by the Muslim women against the Citizenship Amendment) Act, -  “are breeding grounds for suicide bombers,” according to a report by NDTV.

In the same month, he further made a remark saying "India's founding fathers made a mistake by not ensuring all Muslims were sent to Pakistan and that all Hindus were brought to India".