The SSP informed that on receiving information about the assault a night before the murder, Gullu Mishra, the cousin of the deceased Pankaj, has been arrested and the murder weapon an ax has also been recovered. 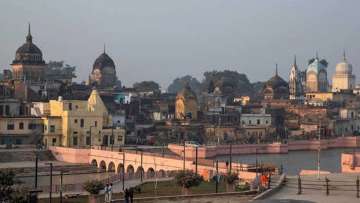 A youth was found murdered by slitting his throat inside the Hanuman temple complex in Bhuapur village of Ayodhya. There was a stir in the temple premises when the body of a man with his throat slit was found. The deceased youth is said to be a resident of Amethi in UP, who sometimes used to come to sleep in the temple. Recently, cases of brutal murder by slitting the throat have also come to light from two different states of the country.

The Circle Officer of Milakpur, Ayodhya, Satyendra Bhushan said that the post-mortem of the dead body is being done. He said that investigation is being done after registering this FIR. At the same time, Ayodhya SSP S Pandey told that the body of 35-year-old Pankaj Shukla has been found in a temple premises of Kumarganj police station area. Pandey said that this matter is not related to the temple.

There was a stir everywhere as soon as the news of the brutal murder of a young man in Ayodhya was received. On receiving information about the incident, a large number of security forces were deployed in the area. It is being told that the deceased Pankaj was staying at his maternal uncle's house for about 2 months and due to no electricity after having dinner, he went to sleep outside the house on the platform of Hanuman temple. In the morning, it was found that Pankaj's slit dead body was lying outside the house.

It is worth noting that recently incidents of slitting of throats have come to light from Udaipur in Rajasthan and Amravati in Maharashtra. Police have confirmed that in these cases, tailor Kanhaiyalal in Udaipur and chemist Umesh Kolhe in Amravati were strangled to death over social media posts in support of suspended BJP leader Nupur Sharma. However, for the time being, the UP Police believes that the case of slitting throat in Ayodhya is a matter of mutual dispute.