Deepotsav program has been celebrated in Ayodhya by lighting 15 lakh lamps in the presence of PM Narendra Modi. 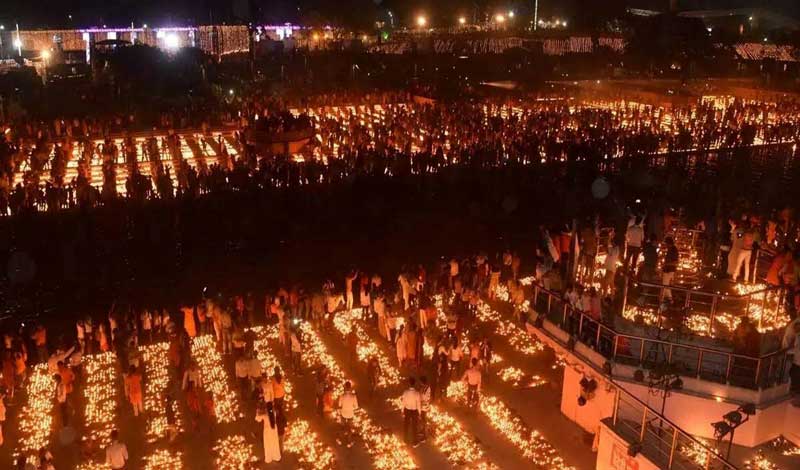 Deepotsav program has been celebrated in Ayodhya by lighting 15 lakh lamps in the presence of PM Narendra Modi. Fifteen lakh 76 thousand lamps were lit simultaneously, due to which this incident was recorded in the Guinness Book of World Records. The Saryu Ghat, decorated with earthen lamps, looked as if the city of Ayodhya had been flooded with gold. The shape of Ram temple was made only through lamps at Saryu Ghat, which looked so grand and divine that everyone's eyes were fixed there.

Apart from this, the light of 15 lakh diyas on Ram's Pauri added to this brilliance. It is worth noting that this was the sixth Deepotsav program in Ayodhya which was successfully organized. The form of heaven was seen on the banks of river Saryu in Ayodhya. The reflection of the diyas in the Saryu river created an enchanting sight, accompanied by a laser show that lit up the skies. Slogans of 'Jai Shri Ram' started echoing everywhere in Ayodhya.

Prime Minister Narendra Modi lit five ghee lamps in the Ram Janmabhoomi temple. The lighting of diyas is a symbol of 'Deepotsav'. Soon after reaching Ayodhya on Sunday evening, PM Modi visited the Ram Janmabhoomi temple, where he offered prayers and then inspected the construction work at the temple site. He was accompanied by Uttar Pradesh Governor Anandiben Patel and Chief Minister Yogi Adityanath. PM Modi first lit a 'diya' and interacted with the team involved in the construction of the temple. After this the Prime Minister went to Ram Katha Park where he performed 'abhishek' of Lord Ram.