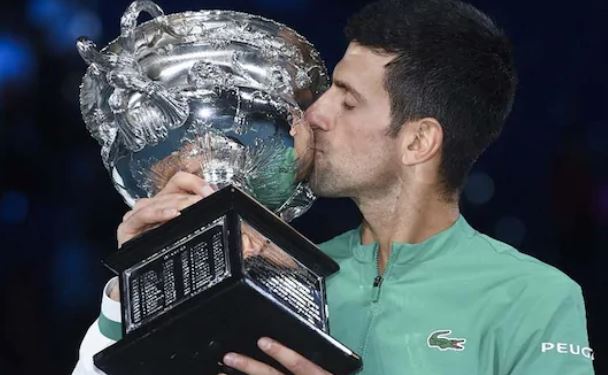 World number one Novak Djokovic trounced upon Russia's Daniil Medvedev in straight sets 7-5, 6-2, 6-2 to win his ninth Australian Open title. With this win at Melbourne Park, the Jocker as he is affectionately called claimed his 18th Grand Slam title to move within two of Roger Federer and Rafael Nadal who have 20 each.

In front of 7,400 fans on Rod Laver Arena the Serb Tennis professional ended the Russian's unbeaten run at 20 matches. But it was a quite a rollercoaster ride to get there, with Djokovic battling an abdominal injury that nearly forced him to pull out after the third round.

Despite admitting it was a gamble to keep playing, with a risk the injury could get worse and affect the rest of his season, the 33-year-old chose to continue and it paid off.

This was Djokovic’s ninth title win at the Australian Open moving him past Federer's eight at Wimbledon but still a long way behind the 13 Nadal has won at Roland Garros (French Open).

Djokovic won three games in a row, despite the disruption of two fans being ejected in an apparent refugee protest, as he took control of the proceedings in the arena.

He raced to a 5-2 lead with Medvedev smashing his racquet in frustration as the set and the championship began slipping away.

Deflated, Medvedev dropped his opening serve in set three and never looked like finding a way back as Djokovic, in his 28th Grand Slam final compared to the Russian's second, drew on his experience to close out the match, dropping to the court in celebration.

The win reinforced Djokovic's status as world number one, where he will mark his 311th week when the new rankings come out on Monday, surpassing Federer's record of 310.

Medvedev will move to a career-high three in the rankings, behind Nadal. A silver lining for Indian Tennis fans, earlier Barbora Krejcikova-Rajeev Ram (American Indian) clinched the Mixed Doubles Title on Saturday at the Australian Open. In less than an hour Barbora Krejcikova and Rajeev Ram won their second Australian Open mixed doubles title with a 6-1, 6-4 win over the home pairing Sam Stosur and Matthew Ebden.

Again today Rajeev Ram had an opportunity to make it a more memorable Australian Open but he failed. Britain's Joe Salisbury and American partner Rajeev Ram missed out on defending their men's doubles title as they lost to Crotia’s Ivan Dodig and Slovak Filip Polasek in the Australian Open final with a score of 6-3 6-4.