At the Singhu site, a man tied to a barricade, his arm cut off and lynched; investigative role of the Nihang Sikh police

Videos and photos captured the incident: the man was tied to an overturned police barricade, his wrist was severed and his ankle and leg broken. 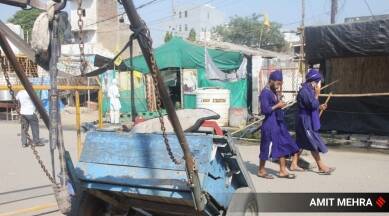 About a month before, Agricultural protests at the Singhu border complete a year a man was brutally lynched and hanged at the protest site on Friday morning, along with a group of Nihang Sikhs, who are among the protesters, claiming responsibility for the killing.

Videos and photos captured the incident: the man was tied to an overturned police barricade, his wrist was severed and his ankle and leg broken. Police say a preliminary investigation suggests the Nihang Sikhs, a group of warriors, killed him for disrespecting the Sikh holy book.

The victim was identified as Lakhbir Singh, 35, a resident of Cheema Kalan village in Tarn Taran district of Punjab. The village sarpanch, Avan Kumar, and the local DSP, Sucha Singh, have confirmed his identity.

Police said they received information around 5 a.m that a man was found tied to a barricade near the protest site, after which a team from Kundli Police Station rushed to the scene.

Avan Kumar, the village sarpanch, said his father was a former soldier, while Lakhbir often worked as a farm laborer.