"It's a sandstorm! I'd never seen one from space before, and this one appeared to be gigantic... I'm wondering how many tonnes of sand went over dozens or hundreds of kilometres. Mother Nature holds some strength," Pesquet writes. 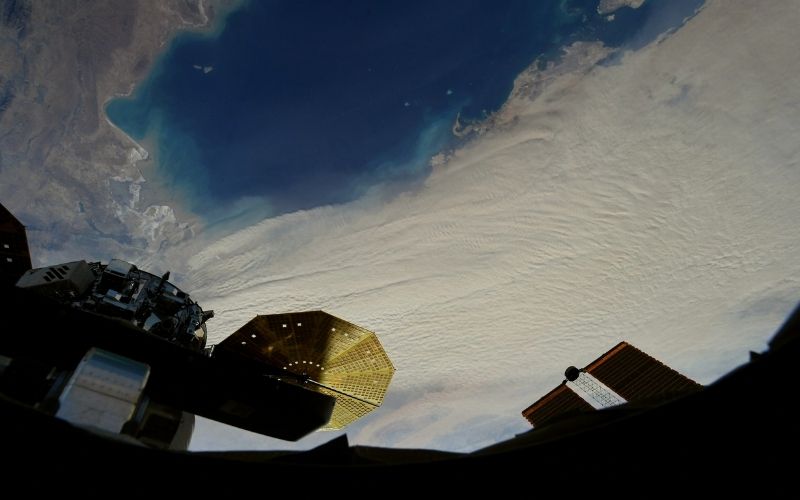 A sandstorm above Bahrain as viewed from the International Space Station. (Photo Credit: Twitter/Astronaut Thomas Pesquet)

Seeing the Earth from the International Space Station is indeed an altogether different experience. On his second voyage to the International Space Station, French astronaut Thomas Pesquet posted stunning photos of Planet Earth. These images (posted on his Flickr feed) depict a bird's-eye view of a massive sandstorm that swept across regions of the Middle East and Asia (Bahrain).

On his Twitter account, Pesquet writes: "It's a sandstorm! I'd never seen one from space before, and this one appeared to be gigantic... I'm wondering how many tonnes of sand went over dozens or hundreds of kilometres. Mother Nature holds some strength."

Scroll down to see French astronaut Thomas Pesquet's Flickr feed and Twitter handle posts. He is a French aerospace engineer, pilot, and European Space Agency astronaut who is currently stationed at the International Space Station (ISS).

Furthermore, he goes into more detail in his Flickr post. "It's a sandstorm! I'd seen sand poured on cars in the streets of Metropolitan France as a result of such a weather event a few times, and I knew as a pilot going to Africa that it might be bad at times, but I'd never seen one from orbit! This one appeared to be enormous... I'm curious how many tonnes of sand went over dozens or hundreds of kilometres. Mother Nature possesses some power."

He made the journey with NASA astronauts Shane Kimbrough, the Crew Dragon commander, Megan McArthur, the pilot, and JAXA astronaut Akihiko Hoshide as part of the SpaceX Crew Dragon crew. Moreover, Pesquet is the very first European astronaut to launch aboard an American Commercial Crew Vehicle.

The photos he's posted also highlight space walks that the astronauts on the ISS have taken. Another shows him and colleague astronaut Akihito inspecting life-saving equipment.

"Aki inspecting emergency equipment: I recognise them since they are the same masks used by pilots in commercial flights. I'm happy to add, though, that I've never used them for anything other than equipment checks! We inspect life-saving equipment in space and in all extreme scenarios on a regular basis, but we pray we never have to use it! "Pesquet writes on Flickr.

Also, he posts photos commemorating World Music Day and their dance on board the Space Station to "shed" some Nitrogen.

The space station flies at an average altitude of 248 miles (400 kilometres) above Earth, as per Space.com. It travels around the world every 90 minutes at a speed of approximately 17,500 mph (28,000 km/h). The station traverses roughly the distance between Earth and the moon in a single day.