Anshu Malik, 19, and Sonam Malik, 18, qualified for the Tokyo Olympics by reaching the finals of the women's 57kg and 62kg freestyle divisions in the Asian Olympic qualifiers. 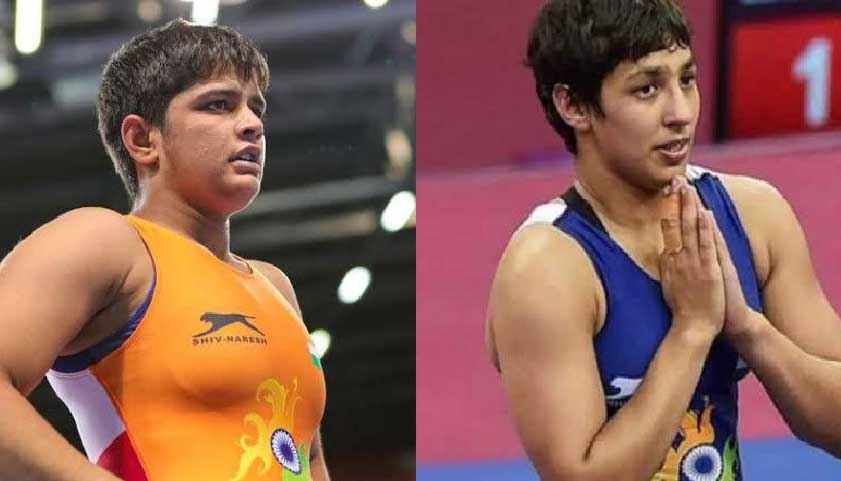 Anshu Malik and Sonam Malik of India, both young wrestlers, performed admirably in the Asian Olympic Qualifiers here on Saturday to qualify for the Tokyo Games.

Anshu, 19, and Sonam, 18, who has steadily progressed from the junior to the senior circuit, have joined senior pro, Vinesh Phogat (53kg), in making the Olympic team. India now has three female wrestlers who will compete for gold at the Summer Olympics. Vinesh had qualified for the 2019 World Championship via the World Championship.

Though Anshu was dominant in the 57kg race, Sonam's perseverance ultimately helped her win the quota and beat out Rio Olympic medalist Sakshi Malik. Sonam made her presence known by beating Sakshi four times in recent trials, claiming the 62kg weight class for herself.

Anshu was so dominant that she only gave up two points on her way to the final, winning all three of her bouts by technical superiority. She started by defeating Korean Jieun Um, then outwitted Kazak wrestler Emma Tissina before defeating Uzbekistan's Shokhida Akhmedova in the semifinals. Sonam defeated China's Jia Long 5-2 before defeating Taipei's Hsin Ping Pai by technical superiority. In the semifinal, she trailed Kazakhstan's Ayaulym Kassymova 0-6 before scoring nine points in a row to claim the quota.

"She has demonstrated that she is prepared for the senior circuit. Take a look at what she's done. People said she was still a cadet, but her consistent victories over Sakshi have improved her confidence "Ajmer Malik, Sonam's personal coach, told PTI.

"Even after conceding points, she does not lose faith or hope. We are really proud of her" said Ajmer, who runs the Netaji Subhash Chander Sports Institute in Sonepat's Village Madina.

Though Seema Bisla lost all three of her bouts in the 50kg division, whereas Nisha got close to securing a quota in the 68kg division yet threw away a 3-1 lead to lose the semifinal by technical superiority to Kyrgyzstan's Meerim Zhumanazarova.

India finish their women’s wrestling campaign at Asian Olympic qualifiers with 2 ???? and a ????. Anshu in 57 kg & Sonam in 62 kg won ???? while Nisha Dahiya in 68 kg won ????.
Anshu and Sonam secured #Tokyo2020 quotas by reaching the finals. They are #TOPSAthlete (development) pic.twitter.com/fw7g7fMGuY