The matter was handed over to Shambhu Dayal at the police station. Taking the woman along, they went towards the Delhi Rewari railway line as per her instructions. Here in the slums, the woman recognized the accused. 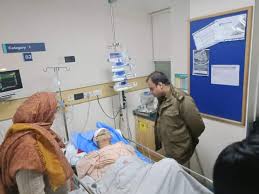 Injured ASI Shambhu Dayal of Mayapuri police station died during treatment. He was injured by knife attack by the accused of snatching. He was admitted to the hospital in Karol Bagh for treatment. The accused had attacked him when he was being brought to the police station after catching him. He was a resident of Sikar, Rajasthan. His last rites will be performed at village Gawli Biharipur under Tehsil Neem Ka Thana.

An accused of snatching in Mayapuri police station area seriously injured Delhi Police ASI by stabbing him. The name of the injured ASI is Shambhu Dayal. The police arrested the accused Anees from the spot. In this case, an FIR has been lodged against the accused under the section of attempt to murder. According to the information, the incident took place on Wednesday at 4 o'clock. In this case, a woman reached the police station and told the police that the miscreant had snatched the mobile from her husband. The matter was handed over to Shambhu Dayal at the police station. Taking the woman along, they went towards the Delhi Rewari railway line as per her instructions. Here in the slums, the woman recognized the accused.

Shambhu caught him and started taking him to the police station. It is alleged that he had a knife hidden with him. As soon as he got a chance near the police station, he suddenly took out a knife and started attacking Shambhu. He was stabbed with a knife at many places including his stomach, waist, neck. Then the local police also reached the spot and the accused was arrested. Shambhu was admitted to a private hospital in Karol Bagh.