India witnessed one of the most catastrophic times during the 2nd wave of COVID-19. Oxygen demand was at an all-time high. As cases decline, demand has also decreased leading to mismanagement of oxygen that is already allocated to various states. 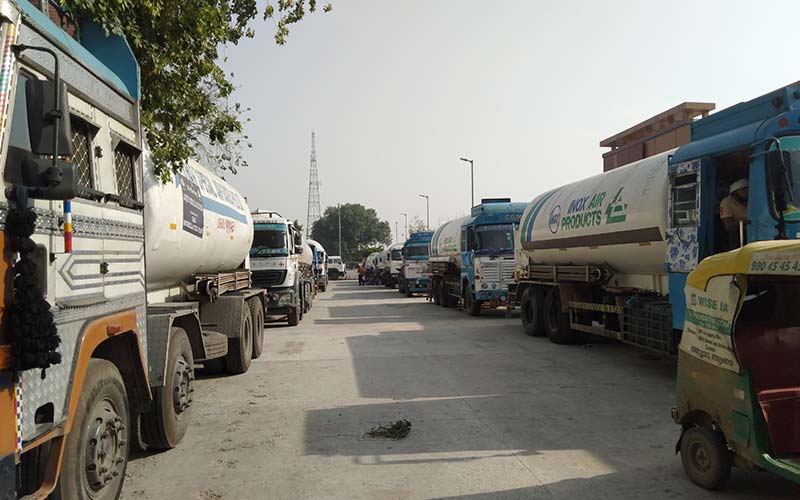 Newspapers, social media, and television have abounded with stories related to the deaths of people who could have lived if they were provided with adequate supplies, be it oxygen or other drugs.

During the oxygen crisis, the government stopped using industrial oxygen and accumulated the resources to increase the production of medical oxygen. As oxygen demand steadily declined in India, mismanagement of oxygen in the supply chain emerged.

A total of 15 tankers are stranded at Faridabad railway station for the past ten days. One of the drivers said that his tanker arrived at the station on 29th May 2021 from the Angul district of Odisha. From then, he is forced to sleep in his truck. For five days, food was also not provided to them. Some of the tankers arrived even before that.He said a sum of ₹1500 was given to him on 26th May and no financial help has been provided after that. Showing the food provided to him by the administration, he alleged that the quality of the food was not up to the mark.

Mahinder Kumar,23, said that leakage has started from his tanker, and within a couple of days, it will be emptied as vacuum tubes are not designed to hold oxygen within tankers for a long duration. He alleged that many media channels reported the issue, but no action is being taken. There is no demand from the hospital since last week.

Many drivers were seen sitting outside on the floor without masks. The average temperature of Faridabad remains 40 degrees celsius. There is a state of anxiety among them.

Oxygen is arriving in the district from Rourkela and Angul of Odisha via Oxygen express train. There is no space left outside the station to accommodate more oxygen tankers. Oxygen has started leaking from some of the tankers. Higher authorities have been informed, and they will not send more tankers here

Faridabad is witnessing a decline in the number of COVID cases since last week. Sixty-six cases were reported on Friday.