In the previous 24 hours, Niraj Kumar Singh, a zonal official for the Prayagraj Municipal Corporation, confirmed with the reporters that he had cremated 40 dead. 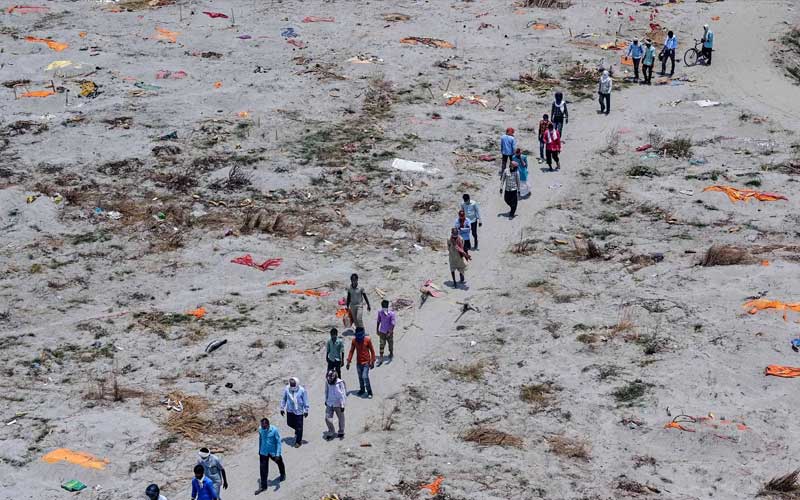 Bodies that were buried on the River Ganga's sandbanks are now floating in the waters of Prayagraj as the river's water level increases with the arrival of monsoon, in yet another vivid depiction of Covid-19's horrific toll in the previous three months.

Over the previous two days, local journalists captured cellphone footage and photos at various ghats in Prayagraj, showing the officials fishing out the dead.

A corpse was discovered on the riverside on Wednesday, with a hand covered in a white surgical glove protruding from the saffron shroud, while another with an oxygen tube still connected to the mouth. A crew from the Prayagraj municipal corporation removed the bodies.

In the previous 24 hours, Niraj Kumar Singh, a zonal official for the Prayagraj Municipal Corporation, confirmed with the reporters that he had cremated 40 dead.

Singh reported, "We are cremating all bodies individually and following all rituals."

Orange shrouds were taken away from remains in Prayagraj as part of a "clean up" effort, prompting speculation that the authorities did not want the graves to be recognised.

On May, images of huge shallow graves in sand banks along the Ganga River in UP and Bihar made international headlines. The images sparked widespread anger as the deaths were thought to be caused by Covid-19, and the state was under-reporting the deaths.

All this coincided with the catastrophic second wave of the Covid-19 outbreak. Hundreds more corpses were also found in eastern Uttar Pradesh and Bihar downstream.

The state of Uttar Pradesh disputed that the fatalities were related to the pandemic, claiming that river burial is a long-standing custom.

Throughout April and May, there were discussions in the BJP regarding Chief Minister Yogi Adityanath's handling of the Covid-19 situation, with some leaders discreetly and publicly voicing their displeasure. Some even sent letters about the pandemic's mismanagement.