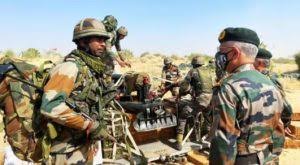 The armies of India and Australia conducted a joint war exercise on Saturday at the Mahajan Field Firing Range in Bikaner district of Rajasthan. This exercise being done by both the countries has been named 'Austra Hind-22'. Defense PRO Jaipur has given this information. It may be known that the exercise between the military contingents of the two countries started on 28 November and will continue till 11 December.

It is known that the joint military exercise between the two armies began on November 28 at the Mahajan Field Firing Range in Rajasthan, which focuses on peacekeeping operations under the mandate of the United Nations. The exercise, which ends on December 11, aims to strengthen military-to-military ties, share best practices and advance cooperation.