The historic win marks the first title for Leonardo Messi, the Barcelona victor for his national team. It comes after 16 years of his debut for Argentina. 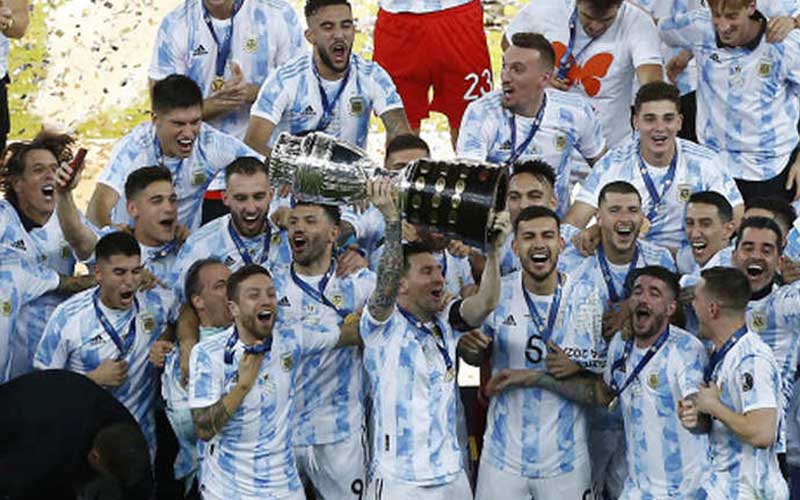 The Copa America 2021 held at Maracana stadium in Rio de Janeiro on Saturday came to a dramatic end with Argentina ending their drought to win an international title after 28 years.

The winning goal came by 33 year old Angel Di Maria who skillfully took the ball under his charge in the 22nd minute and goaled against Brazil's keeper Ederson. A feat no one has achieved in this tournament.

The historic win marks the first title for Leonardo Messi, the Barcelona victor for his national team. It comes after 16 years of his debut for Argentina. Although he missed a goal in the 88th minute, all well that ends well. After the match, he was seen celebrating with his team mates tossing him in the air.

Ten minute before the end, aggression ran high with two players getting a yellow card. It started with Argentina's attack on Brazil's star player Neymar in the 81st minute followed by Marquinhos who got booked in the ongoing tussle.

Brazil who have been in excellent form during the tournament made a sincere effort. But it couldn't break down the resolute Argentine defense. With this win, Argentina also equaled Uruguay's record for winning the Copa America title 15 times.

The Copa America 2021 was the 47th edition of the tournament organized by America's ruling body CONMEBOL. After being postponed for an year because of Covid-19, it took place from 13th June to 10th July and was hosted by Brazil. This was the first time since 1991 that no guest nations took part.

10 teams gave their best with Argentina winning followed by Brazil, Colombia and Peru as runner ups.