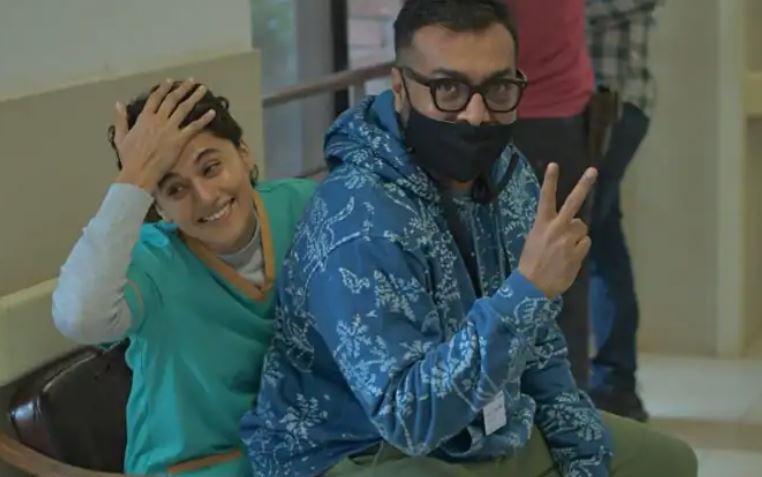 It is “dobara” for the duo, literally and symbolically.

The film “Dobaraa” meaning again, restarts after producer-director Anurag Kashyap and actor Taapsee Pannu are back on track, relieved from the three-day IT-hunt on their properties earlier this week and resumed shooting of the film they are doing together.

Soon after the IT raiders left, the director in a lighter vein posted a message on his instagram announcing the shooting had resumed with this oblique remark, “With all our love to all the haters.”

He said, “And we restart #DoBaaraa .. with all our love to all the haters," he captioned the photograph, obliquely mentioning the I-T raids and the government that engineered it.

Taapsee too wrote three tweets from her account saying, "3 days of intense search of 3 things primarily. 1. The keys of the “alleged" bungalow that I apparently own in Paris. Because summer holidays are around the corner (sic)."

Her second tweet read, "2. The "alleged" receipt worth 5 crores to frame n keep for future pitching coz I’ve been refused that money before (sic)." The last tweet from Taapsee read, "3. My memory of 2013 raid that happened with me according to our honourable finance minister." In the end, she joked, "P.S- "not so sasti" anymore (sic)."

The searches targeting Pannu and Kashyap are part of a tax evasion probe against Phantom Films. And it came at a time when there was no urgency to do so except hint them to remain silent and not be vocal against the government in any way. The duo had spoken against, the Citizen Amendment Act, sympathised with migrant labourers’ pain and favoured Farmers agitation against the government’s new farm laws.

Besides the actor-director duo, the I-T department conducted searches at Reliance Entertainment group CEO Shibhasish Sarkar and some executives of celebrity and talent management companies KWAN and Exceed, premises.