Anouncement of Home Ministry, Agniveers will get priority in recruitment in CAPF and Assam Rifles after 4 years

The army will help them in providing employment opportunities to them. Prime Minister Narendra Modi was informed about the Agneepath scheme two weeks ago. 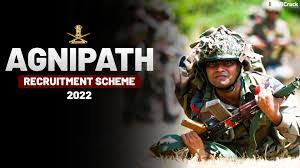 The Union Home Ministry made a big announcement on Tuesday. The Home Ministry tweeted that Agneepath scheme is a visionary and welcome decision of Prime Minister Narendra Modi for the bright future of the youth. Therefore, it has been decided to give priority to Agniveers who have completed four years under this scheme in recruitment in CAPFs and Assam Rifles.

The Agneepath scheme was announced on 14 June 2022 Mangalar by Defense Minister Rajnath Singh and the Chiefs of the three services in a joint press conference. Under this scheme youth will be recruited for four years. When they are released from the job, they will be given a service fund package. The heroes who join the army under this scheme will be called Agniveers.

The Agneepath scheme is part of the government's efforts to reduce the expenditure and lifespan of the defense forces. Under this scheme, 80 percent of the soldiers will be relieved after four years.

According to Defense Minister Rajnath Singh, under the Agneepath scheme, the youth will get an annual package of Rs 4 lakh 76 thousand in the first year, which will increase to Rs 6 lakh 92 thousand in four years. That is, every month the salary will be more than 50 thousand rupees. At the same time, when the job of four years is completed, Rs 11.7 lakh will be given as service fund.