Earlier today, a teacher from Jammu was shot dead at a school at Gopalpora in Jammu and Kashmir’s Kulgam. 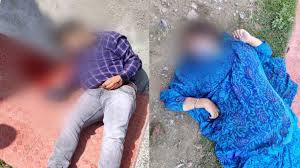 Terrorists opened fire on high school teacher Rajni Bala in the Gopalpora area of ​​Kulgam. 36-year-old Rajni was hit by multiple bullets. After the incident, the Police cordoned off the area. The injured teacher, a resident of Samba, died on the way to the hospital. Earlier on May 12, a Kashmiri Pandit Rahul Bhat was also shot dead by terrorists entering his office.

National Conference leader Omar Abdullah expressed grief over the incident. He said, 'It is very sad. This is another attack on the list of target killings of unarmed civilians. Unless the government gives assurance of normalcy, words like condemnation and condolence are empty. We will not rest in peace.

Target killings in Kashmir began in October. Seven civilians were killed here in five days, including a Kashmiri Pandit, a Sikh, and a migrant Hindu, who had come in search of jobs. Satish Kumar was shot dead by terrorists on 14 April. Earlier on Saturday, terrorists shot dead a policeman on Aiva Bridge located on Ali Jan Road.

Now after the murder of Rahul, the question has arisen again on the security of Kashmiri Pandits. After the removal of Article 370 in Kashmir, 14 Hindus including 4 Kashmiri Pandits were killed in terrorist attacks. This was informed by the Ministry of Home Affairs in Parliament.

The movement of Kashmiri Pandits is going on in the Valley for 18 days. Pandits who got jobs under the Prime Minister's Employment Package are boycotting the work and protesting. This has become the longest-running demonstration in the valley. The protest started after the murder of Revenue Department employee Rahul Bhat. Working Kashmiri Pandits demand that we should be given posting outside Kashmir.

Columnist Aarti Tikoo took to her Twitter and wrote, "jihadi terrorists in Kashmir continue to kill Hindus with only one aim—do not let Hindus return home. Beneficiaries of terrorism continue to be in key positions of power in Kashmir & Delhi. Pakistani agents in India, persistently attempting to undo accomplishments of Modi & Shah." She thrashed the Central Government and said, "Even after protests by Kashmiri Hindus, following the killing of #RahulBhat by terrorists, the government has not been able to create a security & intelligence grid to protect soft targets in Kashmir. Why?"