Another Muslim boy beaten for wearing rudraksh by Hindu protecting youths, in UP

Within a week after Asif's case, another Muslim youth was bashed up by a group of Hindu protectors, for wearing a garland made of rudraksh beads, in Merrut. Video got viral on social media. 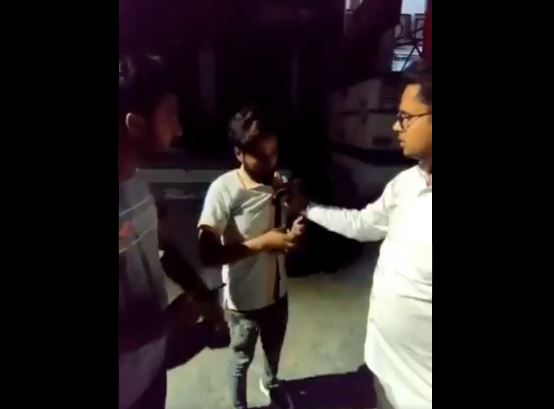 We had barely recovered from Asif’s case from UP, in which this 14 year-old was beaten mercilessly by the Hindu protecting goons, for drinking water from a temple tap in Ghaziabad UP, that another Muslim youth was bashed by a group of Hindus, for wearing a garland made of rudraksh beads.

A video from Meerut, UP, has emerged today, and gone viral.

This boy, namely, Faiz Khan is seen in a video, being held by a bulky man asking him why he was wearing the sacred beads meant for Hindus and Hindu gods. The boy pleads his friend had gifted that to him and he fondly wore it to flaunt it. “Maine shauq shauq maine pehan liya sir,” he is seen pleading and replying to the question.

But the men, dissatisfied with his answer, asks him how dare he wear it? Calls him swine and says that he should be beaten to hell, while the other man, quite hurly-burly, asks him if he would come to the temple with him and read the Geeta?

After this small threatening conversation, without giving him a chance to answer, both boys throw him on the floor and bash him up.

Sounds of bashing up can be heard while the video, posted by several people including some independent media personnel, ends here. This has happened within a week of the incident of Asif, a 14-year-old boy who was beaten by few Hindu sevak (Hindu serving) young men, in front of the priest of the temple in Dasna Gate, Ghaziabad, U.P, India.

Soon after a furor over Asif’s case was created on social media, and several people including Hindi film actors like Naseeruddin Shah and Swara Bhaskar on behalf of other secular non-Muslims apologized to Asif on a Facebook movement called #SorryAsif, initiated by a Paster from Chennai, namely Logan Samuel, another video emerged yesterday on March 20.

In this a youth claiming to be from Mahakaal Team, he himself defines as “the most ferocious gang of Hindu religion/sites protectors who behead people without fearing anyone” in the video, proclaims, he will “openly behead” any person with “Jaali wali topi” (a skull cap Muslims wear) or anyone who defends Asif and speaks against bashing of the boy.

A day after, today’s video of the boy beaten for wearing Hindu sacred beads, has gone viral. The rudraksh can be seen worn in pictures of many Hindu Gods like Rama and Shiva. Said to have calming effect, the beads makers don’t associate it with any religion though.

There has been no statement from the Home Ministry on that, nor any reaction from the UP government where the incident took place.