Hundreds of protesters gathered in Andhra Pradesh's Amalapuram, to protest against the state government’s proposal to name the district BR Ambedkar Konaseema district 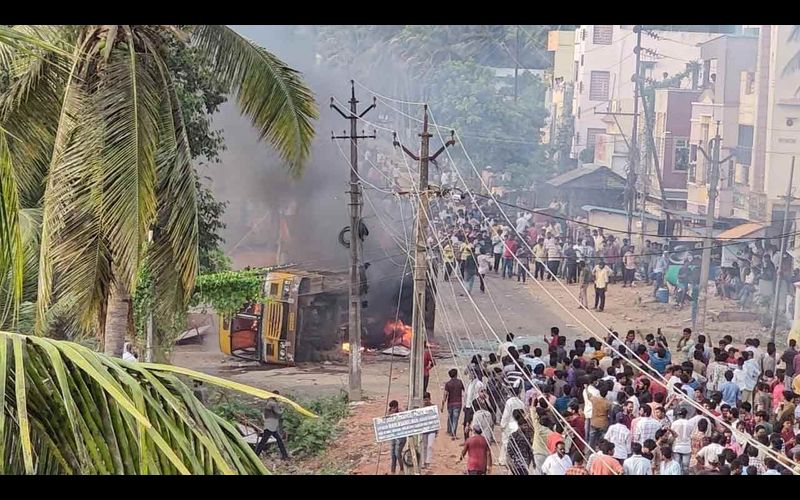 Major Violence broke out in Andhra Pradesh’s Amalapuram on Tuesday in protest against the renaming of the Konaseema district of the state. The angry mob pelted stones at the police and set vehicles on fire. In Amalapuram town, a mob also torched the houses of Transport Minister P Vishwaroopa and Mummidivaram MLA P Satheesh. The police, thereafter, shifted the minister and his family to a safe place. The aggressive protests then torched a police vehicle and a bus, which resulted in the injury of over 20 Policemen.

This happened after, on April 4, the Andhra Pradesh government carved out Konaseema district from East Godavari district. The name of this district was changed to BR Ambedkar Konaseema. The government had also invited objections from the people regarding the name change. After this, the Konaseema Sadhana Samiti objected to the proposal to change the name and demanded that the name of the district remain as Konaseema.

The committee was going to submit a memorandum to DM Himanshu Shukla on Tuesday. After which the administration imposed Section 144 around the Collectorate. However, hundreds of people from the committee reached the collectorate. The committee held demonstrations at Mummidivaram Gate, Ghantaghar, and other places in Amalapuram city. After this, the police showed strictness on this.

In view of the demonstration, a large number of police forces were deployed. The police even arrested some of the protesters. During this some youths escaped, when the police chased them, the protesters attacked the police. The mob pelted stones at the police. In response, the police were also lathi-charged. After which violence broke out.

State Home Minister Taneti Vanitha has accused political parties of violence in the district. He said that some political parties and anti-social elements have together instigated the violence. It is unfortunate that around 20 police personnel have been injured in the incident. The Home Minister said that we will investigate this matter and whoever is guilty, they will get the strictest punishment.