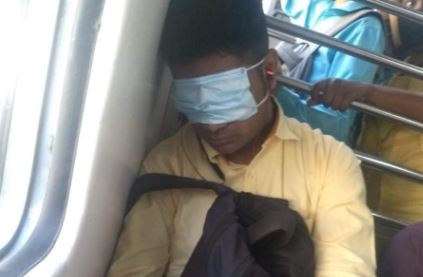 Industrialist Anand Mahindra, who has over 8.3 million followers on twitter, took to Twitter to refocus consciousness on Corona Virus resurgence in Maharashtra and the social fatigue which is evident with reduced or confused use of Face Masks.

He is also known to dig deep into internet and share examples of ‘Jugaad’ – roughly translated meaning clever hacks. He has been quite vocal in his praise of people who use ingenuity and for devising cheap alternative solutions to pressing problems. In the latest tweet however he uses the ‘jugaad’ in its satirical form.

This latest tweet by the Mahindra Group Chairman shows a man sleeping in a train and using his face mask to shade his eyes rather than as a shield against the Corona Virus infection. The rate of Corona Virus infections in Mumbai and Maharashtra has seen a recent upsurge. Many believe that the increase could be due to lowering of the shield by citizens as fatigue might have crept in which is why people are increasingly seen not donning the face masks or not maintaining other social distancing measures.

"When you start looking for reasons behind the recent rise in Covid cases in Mumbai...(This is one jugaad that doesn't deserve any applause.)," Mr Mahindra captions.

This tweet by Mr Mahindra has over 6,300 likes and many retweets and comments. Hopefully this tweet by Mahindra Group Chairman will bring the focus on the face masks and social distancing norms and resultantly reduce the emergence of new cases in Mumbai.