"Didi, you are concerned about your leg, but not the pain of mothers of my 130 workers" Amit Shah.

“On my being injured, some thought that I will not be able to step out with a broken leg. But It's my good luck that I survived. I have a plaster and I cannot walk... (but) the pain of the people is greater than my pain", Mamata 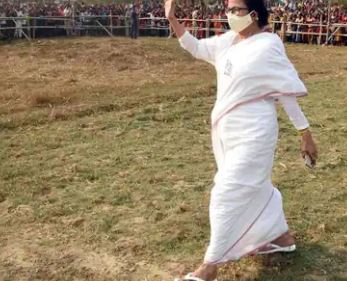 Mamata in her signature hawai chappal, in Nandigram, before injury that allegedly fractured her ankle and toe

The Home Minister Amit Shah for the first time reacted to Bengal CM Mamata Banerjee’s leg injury in a rally at Bankura. He said, “Didi, you're roaming around in a wheelchair, concerned about your leg, but not the pain of mothers of my 130 workers who were killed. I pray you get well soon but it would be nice if you also thought about my workers who have died in violence," Shah said.

He further added, “Mamata-ji has a leg injury, it's not known how she got it. Trinamool Congress calls it a conspiracy, but Election Commission says it was an accident,” he indicated she is making it up.

Shah was responding to an injury, Mamata had accused BJP attackers to have caused at her rally in Nandigram and ushered in political violence in the state. She is contesting from Nandigram.

But Mamata immediately retorted while addressing a rally at the same time in Purulia. She said, “On my being injured, some thought that I will not be able to step out with a broken leg. But It's my good luck that I survived. I have a plaster and I cannot walk... (but) the pain of the people is greater than my pain," she proclaimed.

The BJP has accused her of doing a gimmick for sympathy. It has also asked for a thorough investigation into her allegations, and the treatment she has received.

Mamata has been attending Trinamool Congress rallies in a wheelchair since her discharge from hospital over the weekend. She alleged that her leg was crushed when she was greeting people from an SUV she was travelling in, after filing her nomination papers from Nandigram. Before being taken to hospital in Kolkata, she said to the press, that it was a conspiracy to waste her time in the hospital and not campaign on crucial timings.

On this statement, this cartoon has been doing a round. This is made by Rajasthani painter Kishore Meena

However, the Election Commission ruled out an attack, on Sunday. He said it was an accident in which she was injured.

“Her security was not properly handled" and the Chief Minister's security protocol was breached as instead of sitting in her bullet -proof car, she decided to walk while her security was in the car. The CM has been provided a Z-Plus security and she is supposed to travel in a bullet-proof vehicle. However, the EC has ordered an action against her security in-charge Vivek Sahay.

This is important to note that Bengal has never known an election without a political violence. Mamata is also known for her mild favouritism towards Muslim population in Bengal who also form much of her staff. Recently she visited a sufi shrine and sought blessing of a known Muslim cleric. She, throughout the prayer, that the cleric recited from the Quran, kept on standing with folded hands and a cover on her head. Her party workers and the crowd which went to see her, chanted “Aameen” (may this happen) to the prayers of victory showered on her. The video appeared locally while some alleging that it was an old one. The mainstream media didn’t show it.

However, the insiders in Bengal also say that certain Muslim population in Bengal, allegedly her party workers and their allies, have become quite brazen in few areas due to their political backing and this is not taken in good spirit among the non-Muslim population in this City of Joy. But then, this is also true of the Ruling Party in all BJP-led states. While in Congress-led states, intellectual arrogance and complacency but bot brazenness are usually complained about. This is, by and large, true of the entire country.

While one side believes that Mamata is faking up her broken leg, the other side says PM Modi is no small director of political events in the country. To explain this, cartoonist Tanmaya Tyagi, known for daring cartoons, has come up with this self-explanatory creation about this incident in Bengal.

An ex-CPI-CPM worker who had conducted elections in Bengal over a decade back, says, I made it to say, “All are naked in the pond (Hammam main sab nange hain). I feel EC is right that she should not left her security zone.” Amid all this, there is one important zone that we are totally avoiding and that needs immediate attention currently in Bengal. It is hacking of the EVM machine during the elections. The issue, never resolved till date, will come up majorly in the run up to polling and counting.

Bengal will vote in eight rounds from March 27. The results will be declared on May 2.

Notably, the CM has said that she would challenge in the court that why Bengal should vote in eight phases? To which the EC had replied that he anticipated violence during elections, and Bengal had earlier polled in seven phases too, so it is no big deal.

Reacting on this, Mamata had said that she “would expose the conspiracy” of her detractors behind this too.