Aamir Khan and Kiran Rao to divorce, the couple announces it, officially 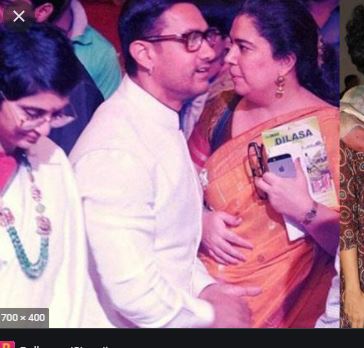 Aamir Khan and Kiran, who married 15 years ago and celebrated their 15th wedding anniversary in December 2020, have announced their divorce today, in an official statement.

The statement also said that they will continue to work together for their production house and Paani Foundation.

The statement read, “In these 15 beautiful years together we have shared a lifetime of experiences, joy and laughter, and our relationship has only grown in trust, respect and love. Now we would like to begin a new chapter in our lives - no longer as husband and wife, but as co-parents and family for each other. We began a planned separation some time ago, and now feel comfortable to formalise this arrangement, of living separately yet sharing our lives the way an extended family does.

We remain devoted parents to our son Azad, who we will nurture and raise together. We will also continue to work as collaborators on films, Paani Foundation, and other projects that we feel passionate about.

A big thank you to our families and friends for their constant support and understanding about this evolution in our relationship, and without whom we would not have been so secure in taking this leap. We request our well wishers for good wishes and blessings, and hope that - like us - you will see this divorce not as an end, but as the start of a new journey.

Thanks and love, Kiran and Aamir.”

I had met Aamir many times, one of which was in our Indian Women’s Press Corps (IWPC) meeting where we discussed about lot of issues persisting in the country, from health to water intake to political leadership.

I asked him separately, “How is it going on between the two wives you have. Does it impact the children and the ladies’ emotional bond with you? Khan was smoking at that point in time. He had requested us not to show on the camera as smoking and images of heroes smoking were restricted in films. He had said that his impressionable fans would follow the suite.

He told me, See, its all about compatibility. I respect both of them equally. In fact, Reena (his former wife) and Kiran (current) are good friends too. They visit each other and gel well. Our children understand our partnership and we all are often at one place like a family.”

Aamir Khan and his children Azad and Ira Khan

At that time the film journalists knew the couple as having great intellectual compatibility and Reena was more of a home-bound girl, who was Aamir’s childhood sweetheart and they married after Aamir’s Qayamat se Qayamat Tak directed by his uncle Mansoor Khan, became a super hit in the late 1980s. They had married a bit earlier but didn’t announce it to the public.

Allegedly, one of the girls that dances on the floor of the auditorium, in Aamir’s famous song “Papa Kehte hain Bada Naam Karega” , sources say, is Reena Dutta. They needed some college girls and Reena was requested to chip in as the girl, swaying to this song. Intrinsically very shy, she agreed on the condition that her face won’t be shown. So, she is shown as waving to Khan while he sings this song, (her face was shown for a flick of a second, then no one knew it was her in a long pink frock in that song) that became an instant hit and a college anthem of those days, and it is sung in college fests till date.

This is Reena Dutta, Aamir Khan's wife for a fraction of seconds in the song Papa Kehte hain in the film Qayamat se Qayamat Tak

Aamir and Rao’s surrogate child Azad is 9 years old while Aamir’s two children from Reena Dutta, daughter Ira Khan is 17, and son Junaid Khan is in his 20s. He is taking a plunge in Bollywood soon. The three kids are often seen with each other celebrating festivals and on family trips, minus Reena.

Junaid Khan, Aamir Khan's son is quite tall and is ready for a dive in Bollywood