Officials said that the movement of passengers towards the holy cave from both Pahalgam and Baltal has been stopped for the time being due to the bad weather. 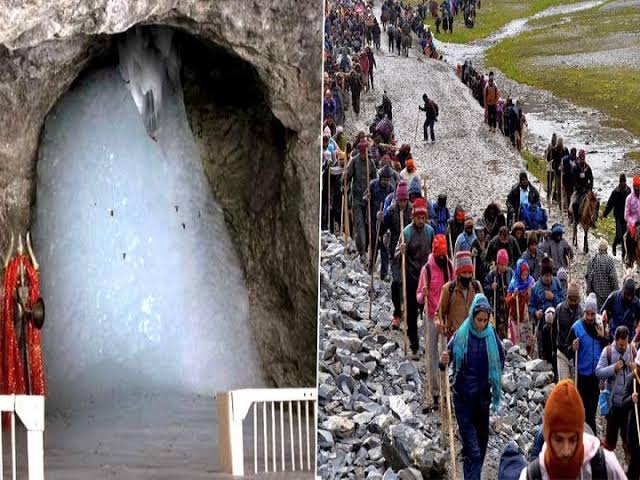 On Monday, the sixth batch of over 7,200 pilgrims left Jammu for Baltal and Pahalgam base camps amid tight security. A total of 7,282 pilgrims left Bhagwati Nagar Yatri Niwas in a convoy of 332 vehicles amid tight security of the Central Reserve Police Force (CRPF), officials said. These include 5,866 men, 1,206 women, 22 children, 179 sadhus and nine sadhvis. He said that 2,901 pilgrims going for Baltal were the first to leave at around 3.40 am in 150 vehicles. After this, another convoy of 182 vehicles carrying 4,381 pilgrims left for Pahalgam. This yatra will end on August 11, on the occasion of Raksha Bandhan.

Jammu and Kashmir Lieutenant Governor Manoj Sinha on Monday visited the Baltal base camp set up for the Amarnath Yatra and took stock of the arrangements there. Lt Governor interacts with pilgrims, officials, mules at Baltal base camp. Inquired about facilities, quality of services, well being of passengers, volunteers and inspected control rooms.

Jammu and Kashmir Director General of Police Dilbag Singh termed the sticky bombs smuggled from Pakistan as a "grave threat" but at the same time that adequate security arrangements have been made for the Amarnath Yatra. He also said that around 150 terrorists are present across the border, but the security forces are on full alert. The security forces have foiled the plans of the terrorists to enter the valley.