After this the Jammu-Srinagar Highway has been closed. Due to the falling of stones from the hills, the batch of Amarnath pilgrims from Jammu has been stopped as a precautionary measure at Chadrankot in Ramban. Relief and rescue teams have been deployed to clear the way. 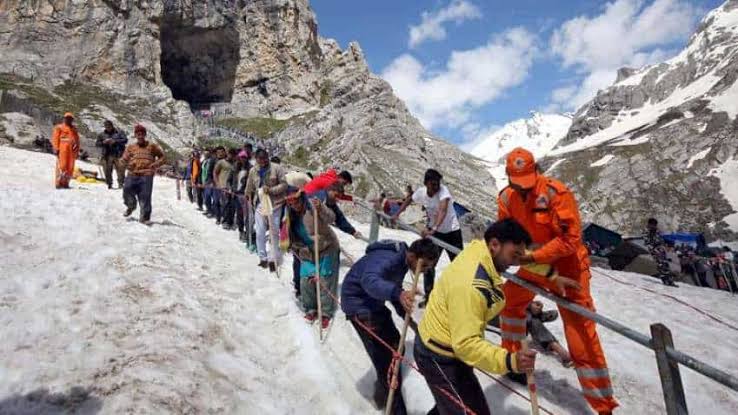 The Amarnath Yatra has been temporarily suspended from both Pahalgam and Baltal routes as a precautionary measure following incessant heavy rains. Landslides have occurred at two places in Banihal area of ​​Ramban.

Regarding Amarnath Yatra, Jammu and Kashmir Traffic Police says that due to the falling of stones from the mountains, the traffic on NH.44 in Mehad of Ramban was stopped. The police say that the devotees should not proceed till the permission is obtained. Earlier on Tuesday, there was heavy rain on the mountains around the holy cave of Amarnath. The condition was that there was a flood situation. In many areas, the water started coming down from the mountains at a high speed. Then the administration hurriedly alerted the passengers and took them out. From there, people were taken to Panjtarni camp. According to officials, there was no loss of life or property during this period. It is said that about 4 thousand passengers have been evacuated from there. When the water suddenly started rising due to heavy rains, the memories of 8th July were refreshed.

Meanwhile, amidst tight security, another batch of only 1,147 pilgrims left for the darshan of Baba Barfani at the holy Amarnath cave at an altitude of 3,880 meters in south Kashmir on Wednesday morning. Officials said that a batch of 3,862 pilgrims had left on Monday and 2,189 on Tuesday to visit the holy cave. The 26th batch of pilgrims in 47 vehicles left Bhagwati Nagar Yatri Niwas on Wednesday morning amid tight security of the Central Reserve Police Force (CRPF), officials said. He said that 476 pilgrims going to Baltal base camp were the first to leave in 18 vehicles.