Before his arrest, Amanatullah Khan had tweeted, "New office of Waqf Board has been built, we have been called by ACB. Chalo then calling has come!" 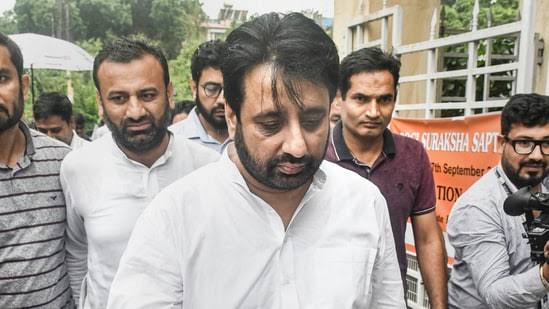 AAP MLA Amanatullah Khan was arrested by the Anti-Corruption Wing (ACB) of the Delhi government on Friday, 16 August. He was summoned for allegedly making arbitrary and illegal appointments to various existing and non-existing posts while he was the chairman of the Delhi Waqf Board. Prior to Amanatullah Khan's arrest, the ACB raided several locations belonging to him, and reportedly recovered an unlicensed pistol and Rs 24 lakh in cash.

ACB chief, Additional CP, Madhur Verma said, “We have arrested MLA Amanatullah Khan in a case registered with the ACB on the basis of incriminating material and evidence against him and for recovery during the searches conducted today.”

A case was registered against Amanatullah Khan in 2016 following a complaint by the Sub-Divisional Magistrate (HQ), Revenue Department, alleging that appointments to various existing and non-existing posts by Amanatullah Khan in the Waqf Board were arbitrary. and were illegal. An FIR was registered in this regard by the ACB in January 2020 under Section 7 of the PC Act and Section 120-B of the IPC.

The Anti-Corruption Unit also claimed that its search team was "attacked by relatives of Amanatullah Khan and other persons" outside his residence.

Anti-Corruption Branch of Delhi Government which reports to Lieutenant Governor VK Saxena. Who is the representative of the BJP-led government at the Centre. He had sent notice to Amanatullah Khan to appear for questioning on allegations of illegal appointment in the Delhi Waqf Board.

Before his arrest, Amanatullah Khan had tweeted, "New office of Waqf Board has been built, we have been called by ACB. Chalo then calling has come!"