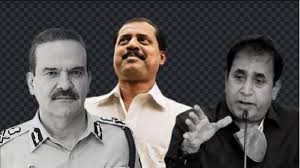 Param Bir Singh, a Former Mumbai Police Commissioner, has unveiled major accusations against Maharashtra Home Minister Anil Deshmukh, in a letter written to Maharashtra Chief Minister, Uddhav Thackeray. In the media reports, Singh discloses that Anil Deshmukh has demanded Rs 100 crore for him. Reportedly, Singh was recently removed from the post of Police Commissioner of Mumbai. Parambir Singh also wrote in the letter that suspended Mumbai Police officer Sachin Vaze had told him that Anil Deshmukh had demanded Rs 100 crore from him every month.

Further, Singh affirms that Anil Deshmukh had called Sachin Vaze several times to meet him at home. The Home Minister had also asked Vaze to raise funds. Moreover, Vaze was also given a target of recovery of Rs 100 crore every month.

Although, no official confirmation has been received from the Chief Minister's Office in this regard so far. However, there is another concerning fact and that is the letter does not have the signature of Former Mumbai Police Commissioner Param Bir Singh.

In response to the serious accusations surfaced against him by Singh, Anil Deshmukh has termed them to be "false" and an attempt by the top cop to save himself. Deshmukh on Twitter: Param Bir Singh has made these false allegations to save himself as well as to protect himself from further legal actions. Further, the involvement of Sachin Vaje in the Antilia bomb scare case and the Mansukh Hiren murder case is "becoming clear", he added.

First the murder of Mansukh Hiren, then the arrest of Assistant Police Inspector Sachin Waje and then the transfer of Police Commissioner Param Bir Singh to DG Home Guard. This whole development has left behind many questions, the answers to which are yet to come to light in the investigation.