Akhilesh Yadav will now fight with PM Modi and not with CM Yogi, made a big announcement from Kannauj

According to sources, it is discussed that Akhilesh Yadav can give ticket for 2024 to Shivpal Yadav from Azamgarh. Akhilesh Yadav's father Mulayam Singh Yadav has also contested from Kannauj. 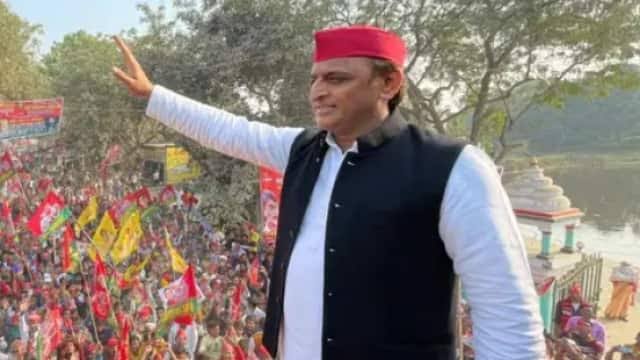 The year 2024 Lok Sabha elections is still far away, but SP chief Akhilesh Yadav has started preparations for it from today itself. Akhilesh Yadav reached Kannauj and announced that he will contest the 2024 elections, that too from Kannauj. It is clear from this that Akhilesh Yadav is going to give a fight to PM Modi in the upcoming elections. Actually, Akhilesh Yadav has not forgotten the defeat of Dimple Yadav from Kannauj till now. In such a situation, his wife has been fielded from Mainpuri seat which is considered safe and now she is ready to face BJP herself in Kannauj.

In fact, when Akhilesh Yadav, who reached Kannauj, was asked why he shifted Dimple Yadav from Kannauj to Mainpuri, he said that now he himself will contest from Kannauj. Till now it was discussed that Akhilesh Yadav contested the assembly elections so that he could be present in the house in Uttar Pradesh as the face of the opposition in front of the BJP government and especially CM Yogi, so that the government could be encircled, but today the In a way he announced that he would contest the 2024 elections and that too it became clear from Kannauj that he is giving more importance to national politics.

According to sources, it is discussed that Akhilesh Yadav can give ticket for 2024 to Shivpal Yadav from Azamgarh. Let me tell you, Akhilesh Yadav's father Mulayam Singh Yadav has also contested from Kannauj. With the intention of giving recognition to the SP at the national level, Mulayam Singh turned to the politics of the Center. In the year 1996, Mulayam Singh Yadav was elected to the 11th Lok Sabha from Mainpuri seat. At that time, when the United Front government was formed at the center, Mulayam was also included in it.