Lego has launched a new series of rainbow-coloured figurines entitled 'Everyone is Awesome,' in which each of the 11 mini-figures has its own unique look and colour. The 346-piece set's creator represents inclusivity and celebrates everybody, regardless of how they identify. 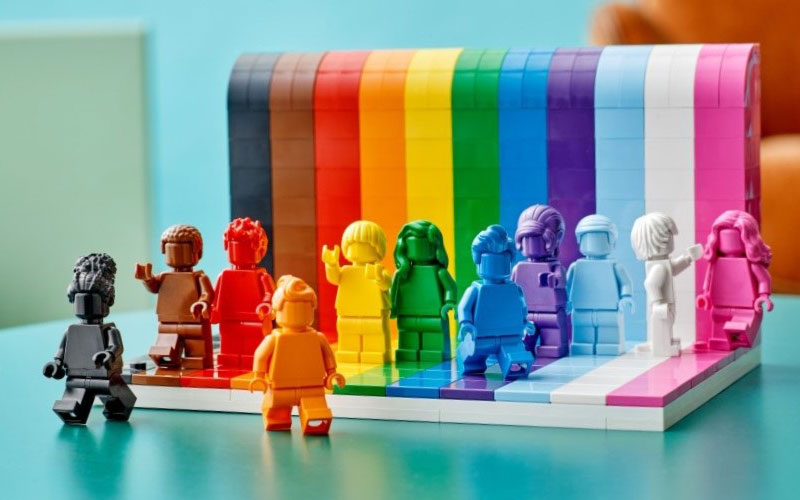 With the right collection of bricks, Lego fans can now build castles, jungles, and whole town centres. Starting from June, the company will unleash a brand new product: 'Everyone Is Awesome', the first-ever LGBTQ-themed collection.

The 346-piece collection 'Everyone is Awesome' comprises 11 monochrome mini-figures, each with its own unique design and rainbow colour.

Moreover, the model was inspired by the classic rainbow flag, an enduring symbol of support for the LGBTQ community, according to Lego. And, to commemorate Pride Month, the new product will go on sale at the beginning of June.

In a statement, set designer Matthew Ashton said, "I wanted to create a model that symbolises inclusivity and embraces everybody, no matter how they identify or who they love." Customers of all ages shop at the store, but many of the sets are favourite childhood toys.

"Having LGBT-inclusive toys provides a place for families to let LGBT children know that they are cherished and welcomed," said Joe Nellist of the UK's LGBT Foundation.

"Growing up in a world that constantly tells you there's something 'wrong' with you can lead to a deep sense of shame," Nellist continued, "which we know can have a long-term effect on both mental and physical health."

The collection was also a celebration of the LGBTQ culture inside Lego as well as among the company's adult fans, according to Ashton.

He said, "I am lucky to be a part of a proud, welcoming, and passionate group of colleagues and fans."

"Through Lego bricks, we share a passion for imagination and self-expression, and this collection is a way for me to express my appreciation for all the love and motivation that is constantly shared."

The business has had a very busy year. Summer 2020 saw a spike in sales as more people stayed at home due to the pandemic and searched out toys. As a result, Lego's net profit increased by 11% to $622 million.

The 'Everyone Is Awesome' collection is being released at a time when the toy industry as a whole is working to make well-known children's toys more inclusive.

Mattel, the company behind Barbie dolls, released a line in 2020 that featured a doll with no hair and another with vitiligo. In 2019, Mattel released a separate doll line named "Creatable World," which featured gender-neutral dolls.