The administration was already alert and police force was deployed in sufficient numbers at all the important places. The youth say that the government should continue with the old process for recruitment, salary and pension in the army. 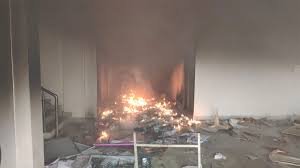 The protest of the youth, which started in Bihar against the government's new scheme 'Agneepath' for recruitment in the Army, Navy and Air Force, has taken a fierce form on the second day i.e. on Thursday. The miscreants ransacked and set fire to the BJP office in Nawada district. Earlier, a BJP MLA was attacked in the same district. Buxar and Ara stations of Delhi-Howrah main railway line have been vandalized and railway property has been damaged.

This chain of protest is being seen from Bhagalpur to Buxar. In many places, bogies of trains have been set on fire, while in Arrah, many passengers have been injured due to stone pelting on the train. Protests have intensified in the last two days in many cities including Motihari, Siwan, Chapra, Jehanabad, Arwal, Nawada, Patna, Muzaffarpur, Kaimur. Youth held a meeting at Gandhi Maidan in Gaya.

Stones were pelted on the convoy of former Chief Minister Jitan Ram Manjhi in Gaya on Wednesday evening during an uproar over the same subject. On Thursday, miscreants attacked the MLA's vehicle in Nawada. The windows of his car were broken. Due to the commotion, many trains including Patna-Ranchi Janshatabdi Express, Kashi-Patna Janshatabdi Express, Lokmanya Tilak-Kamakhya Express had to be stopped for hours at different stations.

In protest against the Central Government's Agneepath scheme for recruitment in the army, students also demonstrated on Wednesday at various places in Bihar's Patna district including Maner in Ara, Begusarai, Gaya, Buxar and Navgachia of Bhagalpur. In Patna's Maner, students protested against this new scheme of recruitment in the army and blocked traffic from place to place. In Arrah, the workers of Inquilabi Naujawan Sabha took out a protest march from the Arrah Railway Station premises regarding the Agneepath Recruitment Scheme.