At the same time, roadways buses were stopped in Bharatpur. Kota-Patna Express has also been canceled due to the fierce demonstration in Bihar. 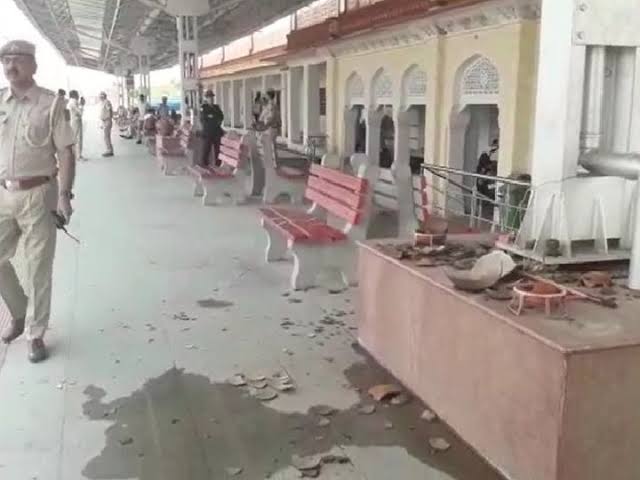 Youth are protesting in many districts of Rajasthan against the Agneepath scheme. The protesters also clashed with the police. Violent demonstrations are taking place in six districts including Jaipur, Jodhpur, Ajmer Alwar of the state. Benad railway station in Jaipur city has been vandalized.

The protest started from Alwar district on Saturday. In Behror, the youth preparing for the army jammed the Jaipur-Delhi National Highway. On being stopped by the police, they started pelting stones. Due to the protest, the protesters also clashed with the police stationed here. The highway was jammed for about an hour.

A large number of police forces have also been deployed on different parts of the highway. In Jhunjhunu district also, students have tried to block the road. In Chirawa town here, police clashed with students and an attempt was made to block the railway track.

The anger of the youth against the Agneepath scheme is also being seen in Jaipur and Jodhpur. In Sanganer, Jaipur, students took out a rally and raised slogans against the central government. A large number of students suddenly entered and ransacked the Benad railway station here in the afternoon. The police who reached the spot, chased the miscreants from there and security has been increased. At the same time, the students protesting in Jodhpur have been detained by the police.