After the death of mother Heeraben, PM Modi will work even today, no government program will be canceled

This will be the first and the seventh Vande Bharat train in the country to be launched in West Bengal. Thus earlier Vande Bharat was inaugurated on December 11 for the Bilaspur (Chhattisgarh)-Nagpur (Maharashtra) route. 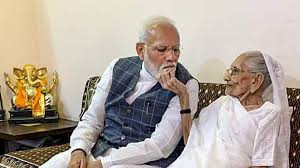 Hiraba, mother of Prime Minister Narendra Modi, passed away today at around 3.30 am during treatment. On receiving the news of Hiraba's demise, PM Modi left for Ahmedabad and paid homage to the mother and lit the pyre. Meanwhile, information has come to the fore that PM Modi will continue to work even after the death of his mother. Today many government programs are to be organized in which PM has to participate. However, the PM was scheduled to visit West Bengal to launch development projects, which he will now join via video conferencing.

PM Modi will flag off the Vande Bharat train at Howrah, Kolkata and attend the meeting of the National Ganga Council to be held under the Namami Gange scheme and other development works of the Railways. PM Modi will attend these programs through video conference.

Prime Minister Modi took to Twitter this morning to learn about his mother Hiraba's demise. On Friday morning, he posted a heartfelt tweet, "A glorious century resting at the feet of God.. In mother, I have always felt the trinity in which an ascetic Travel is included." Salute to mother for leading a selfless karmayogi and a life devoted to values.

PM Modi will flag off the Vande Bharat Express connecting Howrah to New Jalpaiguri at Howrah Railway Station and also launch various developmental projects in the state. This will be the first and the seventh Vande Bharat train in the country to be launched in West Bengal. Thus earlier Vande Bharat was inaugurated on December 11 for the Bilaspur (Chhattisgarh)-Nagpur (Maharashtra) route.