The Tehrik-i-Labaik Pakistan party had given the government until 20th April to expel the French ambassador in response to the publication of cartoons depicting the Prophet Mohammad in France. 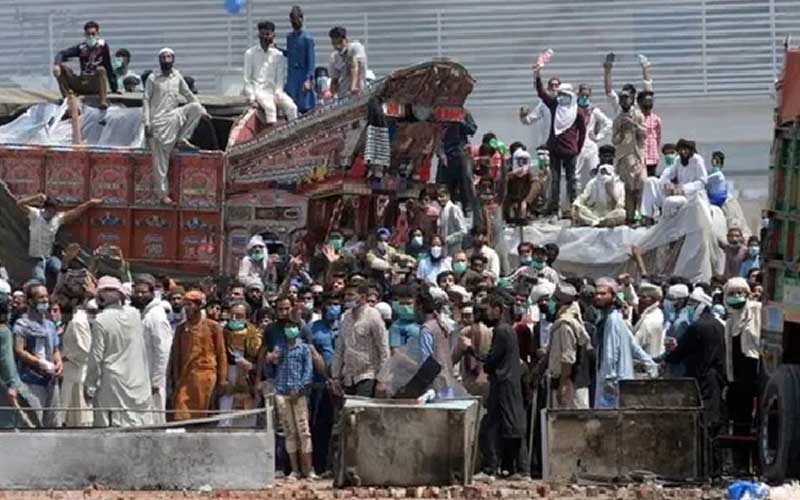 After a week of violent clashes following the arrest of the group's chief, police in Pakistan said a hardline Islamist group had taken seven security personnel hostage at its headquarters in Lahore on Sunday. "TLP members are keeping five police officers and two rangers hostage," Rana Arif, a Lahore police spokesman, told AFP, referring to the Tehreek-e-Labbaik Pakistan party.

The TLP (Tehrik-i-Labaik Pakistan) group had allowed the government until April 20 to expel the French ambassador in response to the publication of cartoons depicting the Prophet Mohammad in France. The authorities retaliated by arresting its chief, leading supporters across Pakistan to stage demonstrations and sit-ins.

At least 4 people have been killed, hundreds have been injured, and thousands have been arrested. Following the attack, Pakistan banned the party.

"TLP activists have two diesel tankers loaded with thousands of litres of gasoline. They are throwing petrol bombs and stones at security personnel, as well as firing bullets at them, injuring 11 officials "Rana added that the operation was still underway. According to TLP spokesman Shafiq Amini, four supporters were killed by police on Sunday, and several others were injured.

Pakistani news outlets have been prohibited from covering the group after it was outlawed last week, and telephone and internet networks were disrupted in the region where the clashes were taking place on Sunday. Roads leading to the group's headquarters in Lahore's Chowk Yateemkahan have been blocked.

Nonetheless, TLP supporters have been posting videos on social media of what they say were disputes with police on Sunday, and hashtags supporting the party were trending in Pakistan on Sunday.

Furthermore, Reuters was unable to independently check the footage, which showed thousands of protesters clashing with police in riot gear as clouds of tear gas hung in the air and the crackle of gunshots could be heard. In other videos, wounded demonstrators were seen being taken away.

Prime Minister Imran Khan said on Saturday that the group had been outlawed because it "challenged the writ of the state and used street violence and attacked the public and law enforcers." Last week, France advised its people to leave Pakistan temporarily for their own security.