The marriage of on in Neena Gupta and Viv Richards. Masaba will soon be seen in the second season of Masaba Masaba on Netflix. 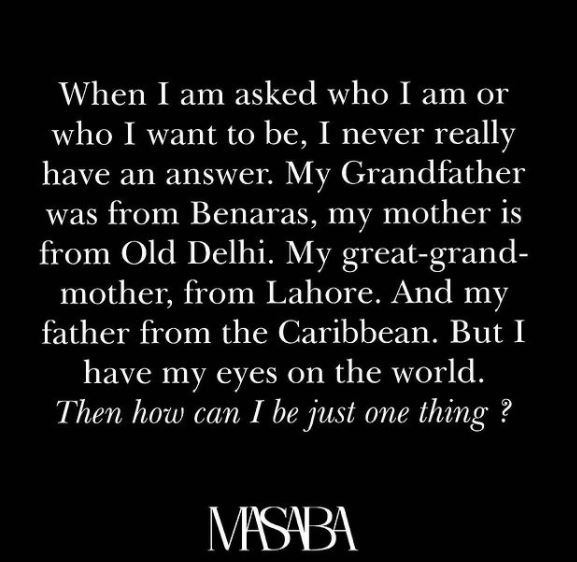 Masaba Gupta shared a rare childhood photo featuring her parents Neena Gupta and Viv Richards. She titles it, ‘My world. My blood’ Masaba was allegedly born out of wedlock between West Indies cricketer Viv Richards and actor Neena Gupta in the 1980s. This was the boldest step the actor had taken and received flak too. She went viral with her bold step and love affair with the star cricketer.

The marriage of on in Neena Gupta and Viv Richards. Masaba will soon be seen in the second season of Masaba Masaba on Netflix.

Yesterday she took to Instagram to share a rare picture of herself in mother’s lap with Viv Richards looking at her. In another her her maternal grandparents are seen, captioned, “My world. My blood.”

A message about her identity follows. It says, “When I am asked who I am or who I want to be, I never really have an answer. My grandfather was from Benaras, my mother is from Old Delhi. My great-grand-mother from Lahore. And my father from the Caribbean. But I have my eyes on the world. Then how can I be just one thing,”

Masaba and Neena Gupta poured their hearts and opened up their lives in Netflix’s Masaba Masaba in 2020. The duo is set to return on screen with the second season soon.

Neena has been the boldest, most honest actors in Bollywood and tele serials who got flak from the conservatives but as time changed, she was understood, as she slowly came out with her stores, love, lovelessness, betrayal, struggles and need to work openly. She is now hailed as one of the most honest actors Bollywood has.

With Masaba, both complete the best picture of comraderies.