Delhi CM Arvind Kejriwal did a road show in Singrauli. While campaigning for AAP candidate Reena Agarwal, Kejriwal had said that in 5 years, I will change the look of Singrauli. 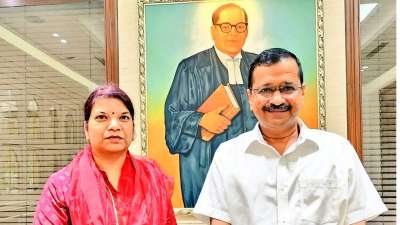 Aam Aadmi Party has also opened an account in Singrauli, Madhya Pradesh. For the first time in MP, there has been a banging entry of AAP. AAP's candidate from Singrauli, Reena Agarwal has won by more than 9000 votes.

For the first time in Madhya Pradesh, Arvind Kejriwal's party AAP has made a strong presence. Rani Agarwal of AAP has defeated the candidates of BJP and Congress for the post of mayor of Singrauli Municipal Corporation seat. A total of 1,06,000 votes were cast in the mayoral election held in Singrauli on 6 July, out of which AAP candidate Rani Agarwal got 34,585 votes, Congress's Arvind Chandel got 25031 and BJP's Chandra Pratap Vishwakarma got 25233 votes.

Aam Aadmi Party chief and Delhi Chief Minister Arvind Kejriwal had reached Singrauli in the election for the post of mayor in 16 municipal corporations of Madhya Pradesh. During this, while addressing the public meeting, he had said that make Rani ji the mayor, vote for the broom, I will change the look of Singrauli within 5 years. Kejriwal had said that if we do not work, I will not come next time to ask for votes. Delhi CM had said that for how many years have you been voting for these parties, try and see Kejriwal once.