Russia’s Investigate Committee told six people were injured and 8 were dead in the attack and the suspect had been wounded while being detained. 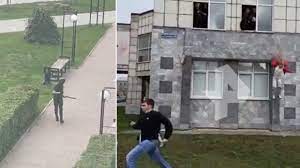 A student opened fire on a university campus in Russia on Monday which killed eight people before he was detained, investigators said. The committee also said many people were injured in the attack and the suspect had been wounded while being detained.

reports of another school shooting in Russia; this time at Perm State University. Russian agencies say there are casualties. pic.twitter.com/jkeyGDLO05