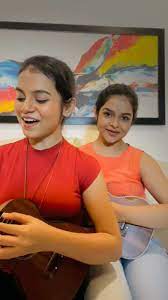 A famous singing duo, Antara and Ankita, made a new version of the viral song Manike mage while playing their ukuleles. Sinhala's song has captured the hearts of Indians including celebrities. As the Sri Lankan song resumes to dominate streaming platforms, a new cover by Indian sisters has hooked everyone online.

A favorite singing sister duo, Antara and Ankita Nandy shared an Acapella version of the song while armed with the usual ukuleles. And they tried to achieve Sinhalese pronunciations, in a mod to the cultural connect with Tamil, they paired the song with Rowdy Baby, a famous song from MAARI 2 which is sung by Dhanush and Dhee.

The Nandy sisters unite the Sinhala and Tamil songs and presented a beautiful amalgamation of groovy earworms that has gone viral. This must also be noted that Dheekshitha Venkadeshan whose stage name is Dhee is a Sri Lankan too.