People from different agencies worked together to safely move the turtle back into the water. 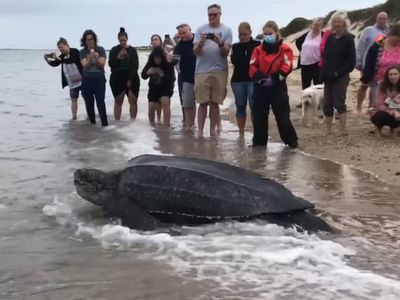 A mammoth turtle of 272 kg found itself stranded in a mudflat in Massachusetts, was released back into the ocean by experts from the New England Aquarium. A short clip has gone viral on social media from the release. The Aquarium told the turtle was stranded along the Herring River on a mudflat.

Seeing the 5-foot long turtle struggling on the surface, the crews from the Mass Audubon Wellfleet Bay Wildlife

Sanctuary and the International Fund for Animal Welfare responded and carried out a quick rescue. But vets examined the turtle and determined it to be in good health. Bob Prescott, director emeritus for Mass Audubon Wellfleet Bay Wildlife Sanctuary said, We wanted to keep it off the oysters and keep it from stranding somewhere we could not rescue it. Before being released in water at Herring Cove, the leatherback turtle was fitted with satellite and tracking devices.