The painting depicts a street in Paris called Montmartre, which is documented to be painted in 1887 by this Dutch artist who lived in Paris for quite a few years before he left for south of France in 1888. 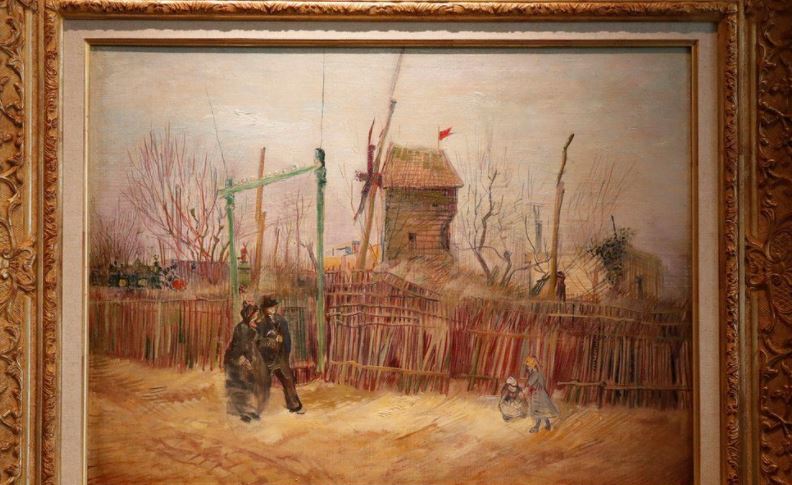 The painting depicts a street in Paris called Montmartre, which is documented to be painted in 1887 by this Dutch artist who lived in Paris for quite a few years before he left for south of France in 1888.

Reportedly, the painting was kept closely guarded by a family in France for most part, around 100 years. But finally, it was kept under the hammer later this week, on Thurday. Notably, the auction for this earthy painting was done twice, in a week’s time and finally came under hammer on the live-streamed auction on the internet by Southey’s from Paris itself.

It is understood that the art experts knew about the work, and it was in their observation and knowledge from time to time. However, the coloured work of art was reported to be catalogued as a black and white photograph.

The coloured painting becomes important for a reason. And that the street life in Montmartre portrays the time when it was just a hamlet and a windmill was its landmark of sorts. It also depicts church Sacré-Cœur, under construction at that point in time, but now it is a famous site that is supposedly the hallmark of this area now. This space was then a part of northern outskirts of Paris, now a central location.

That way, the work of art is a document in history preserved for over 100 years.

This is also documented that Montmartre is one of Van Gogh’s series from the time when he was reportedly living with his brother Theo between 1886 and 1887 in Paris. The poor artist used to revisit this part of Paris for a cheap drink often after he moved to Southern France for greener pastures.

The site that he had painted was close to his home and the mills around were becoming entertainment centres during his stay. The tones of the painting clearly shows that Van Gogh wasn’t at peace while painting them. It reflects his sad and dark state of mind.

This is to be noted that ironically, Van Gogh died in penury in 1890, three years after he painted this work. He was alone and lonely. While after his death, the collectors and sellers are minting money on his name.

Only recently a senior artist in India had protested saying dead artists don’t need money. Their works should be evaluated when they are alive as they too need currency to run their kitchen and pay their bills.

A document in history revaluated at a premium, after eons has its own flip side and baggage. It’s a no fetch for its own creator, is sad. And it must change.