The highest fountain of lava may have been estimated at 100-200 feet, but most fountains were less than this. A cloud is emerging, blowing mainly to the north-west." 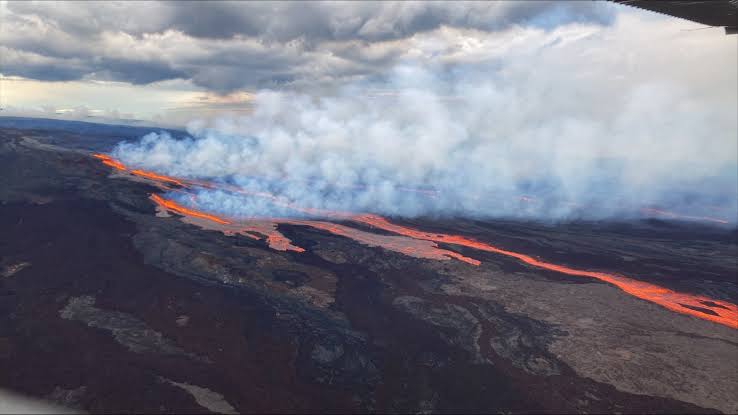 Fountains of lava up to 200 feet (60 m) high were seen flying into the air from Mauna Loa in Hawaii, the world's largest active volcano, and rivers of molten rock gushed out. Geologists have given this information. Four craters have now opened in this huge mountain, which erupted on Sunday for the first time in the last 40 years.

Huge clouds of steam and smoke were seen flying in the sky from this volcano spread over almost half of the huge Hawaiian island. The United States Geological Survey (USGS) said in an update released Monday. "The highest fountain of lava may have been estimated at 100-200 feet, but most fountains were less than this. A cloud is emerging, blowing mainly to the north-west."

According to geologists, at present there is no danger to the people or their property living under the volcano. USGS reported on Tuesday, "The longest and highest lava flow is currently coming out of the third fissure." USGS said the pressure at Mauna Loa had been building for years, and that the eruption could be seen 45 miles (72 km) away in the west coast town of Kona. This lava does not currently pose any threat to the population, but scientists say that the winds can carry volcanic gas and fine ash downstream.