As per the police report, 84 individuals were detained, including 12 women, call agents, administrators, senior administrators, caretakers, apart from ₹64,30,000 in cash, 93 laptops, four desktops, and two SUV automobiles, of the so-called call centre. 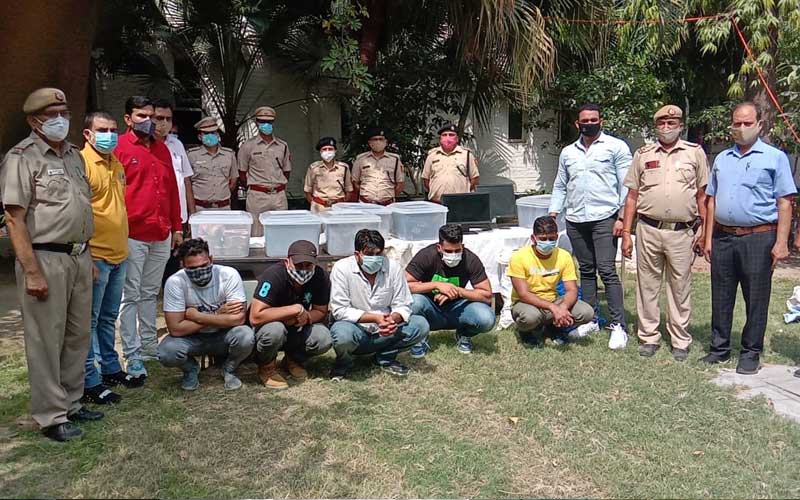 A bogus international call centre was busted at Jagatpuri in Shahdara District on Friday. Several culprits and software equipment’s were detained by the police.

The police personnel detained 84 people including 12 women, call centre agents, administrators, senior administrators, and caregivers. An amount of ₹ 64,30,000 in cash, 93 laptops, four desktops, and two SUV automobiles were also recovered from the fake call centre. On Thursday, they were apprehended in a late-night raid.

The modus-oprendi of the call centre, located at a busy by lane of sorts, was quite filmi in nature.

In a press briefing, senior police officer R Sathiyasundaram informed, "It was also discovered that these individuals were utilising unlawful tactics such as VOIP calling to defraud Amazon consumers living in the United States by impersonating Amazon personnel. They would send a messge to these customers that a certain amount has been put in their account, via this call centre number. The receiver would call back on this call centre number to confirm and were trapped by these hackers. They would then inform the US citizens that their social security cards or numbers had been hacked, fearing which the citizens used to ask for the solution from the hackers themselves. The hackers would then threaten them to buy an amazon gift voucher worth $99 to 1000, upon buying which the customer would automatically lose a sizeable amount from their amount.”

Following an inquiry, it was discovered that call centre employees obtained information about Amazon customers who were living in the United States and then misused that information to fleece them by phoning them. During an interrogation it was revealed that the mastermind for the entire operation is one Mannu Singh Tanwar, a Bhiwani resident, who already has a criminal record with Gurugram police station. Tanwar was detained in September 2020 by Gurugram police for his alleged involvement in a similar case in the city.

“Even while leaving for jail, he had handed over the operations of this call centre to his aide called Rakesh, who was managing it on his behalf at Jagatpuri near tiles market. Rakesh lives in Bhiwani's Dhanna village. Mannu is currently imprisoned in Haryana's Bhiwani prison for his suspected participation in a murder case too,” added Mr Sathyasundaram.

According to him, a raid was performed and it was discovered that a complex set up of laptops, PCs, and accessories had been built there, and that all of these people were on the phone with clients.

"It was also discovered that these individuals were utilising unlawful tactics such as VOIP calling to defraud Amazon consumers in the United States by impersonating Amazon personnel and afterwards threatening them that their social security cards or numbers had been compromised," as per Sathiyasundaram.

The fake call centre was recovered with ₹64,30,000 in cash, 93 laptops, four desktops, and two SUV automobiles, according to the authorities.

Following an inquiry, it was discovered that call centre employees obtained information about Amazon customers who were living in the United States and then utilised that information to defraud them by phoning them. During interrogation, it was discovered that the bogus call centre is mostly managed by Mannu Singh Tanwar, a Bhiwani resident. Rakesh was running a bogus call centre as a caretaker while Mannu was in jail in connection with the suspected murder. Rakesh lives in Bhiwani's Dhanna village. Mannu is being held at Bhiwani prison, according to the investigation. He worked as a contractor for a liquor store. Gurugram police station detained him in September 2020 for operating a bogus call centre in Gurugram.

Multiple US numbers discovered in a WhatsApp group

Several phones were confiscated during the inquiry. Various US cell phone numbers have also been discovered in their WhatsApp group. These were used to deliver information about gift cards to blockers. During an inquiry, the police asked the caretaker to present the licence that allowed him to operate the centre, but he was unable to produce any paperwork.

The raid exposed that a complex set up of laptops, PCs, and accessories that had been assembled there were used for the illegal operations. When the raid was conducted, all the people were buy on the phone calls with alleged clients.

On an enquiry that Amazon must be aware of the gang as the operations were done in their name and gift vouchers were offered by Amazon only, Mr. Sathyasundaram claimed that Amazon had no idea about the fake racket being carried using its voucher because “they are selling their gift vouchers only, who buys them is not their concern.”

The police is sensing a far-bigger racket and more catches via this thread. Further investigation is on.