Exit Polls released around 7pm yesterday paint a grim picture for BJP in Tamil Nadu, Kerala and even in West Bengal 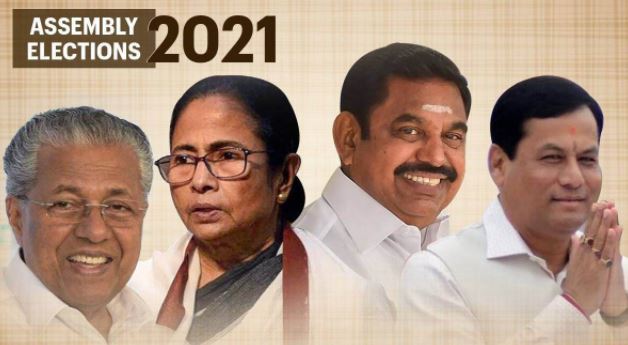 Election Exit Polls is a survey of a percentage of voters who are requested to show their leaning after they have already casted their votes. Rather than straight questions they depend on measuring the flow of their thoughts and to capture where they might have voted.

The state has consecutively voted for Mamata Banerjee-led All India Trinamool Congress for two terms and it seems that the incumbent Chief Minister is set to be victorious for a third consecutive term in West Bengal. The eastern India state of West Bengal went to polls in eight phases and the last phase of the election was held amid an unprecedented Covid spike.

Before the AITC came to power the state was a left bastion and it had an uninterrupted seven consecutive terms. It seems that this time the BJP will be the number two party – a debut for it.

The state which saw Bharitya Janata Party – the Right-leaning Majority-appeasing party win in the last assembly elections, is in for a strong fight back from the Congress led Secular Alliance. The Exit Polls are presumably not able to record correctly the opinion of the citizens of the state well enough. The polls in this North Eastern state’s assembly elections were conducted in 3 phases.

This time even though the BJP has been able to scrape through but its anti-minority law CAA/NRC will have far reaching repercussions in this state later – because it will dis-balance the population in terms of language spoken in the state.

The Opinion Polls in Kerala depict a win for the CPI (M) -led LDF. This will be a one-off case when they will be able to beat the anti-incumbency and retain the power in Kerala. Most of the pollsters are predicting a return for Pinarayi Vijayan. This might have been the reason why the UDF will not be able to take power.

Here BJP is like a non-existent party which will go down without a whimper. Many like E Sreedharan, the much acclaimed Metro man will rue his decisions.

Every pollster and before that all psephologists had predicted a complete rout of AIADMK – BJP alliance. In fact all who know a bit about Tamil politics have said that AIADMK may have performed a little better had they not come into an alliance with BJP.

The DMK – Congress combine is all but ready to be crowned victorious. Other smaller parties are also not going to make much noise this time in the assembly elections.

The only easy cherry picking for BJP backed NDA. This is the Union Territory which had a lot happening just before the elections. Most of the ruling Congress legislators had jumped the bandwagon and joined BJP.

But a complete rout which was envisaged will not yet happen according to the pollsters. In one of the exit poll results it seems they would be neck to neck to the podium.