35 killed, over 450 injured in container depot fire in Bangladesh

According to fire service sources, three of their employees also died during the incident. The identity of the dead is yet to be ascertained. 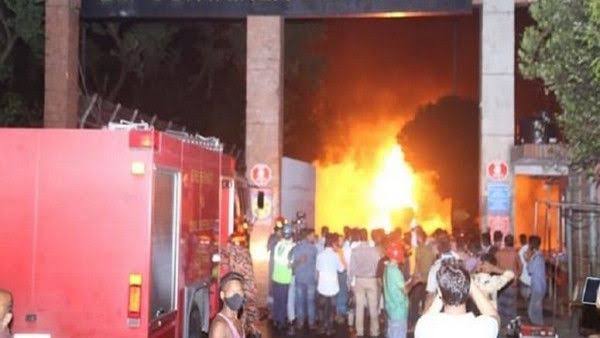 A massive fire broke out at an inland container depot in south-eastern Bangladesh. Due to this 35 people died. While more than 450 people were injured. Officials gave this information on Sunday. The accident occurred on Saturday night when a container caught fire in Sitakundu, 40 km (25 miles) from the port city of Chittagong, they said. Fire service officer Farooq Hussain Shikdar said on Sunday morning that firefighters were still trying to douse the blaze.

Local residents said the blast was so strong that the windows of nearby houses were shattered. Chittagong Civil Surgeon Mohammad Ilyas Hussain said the death toll in the blast could rise as some of the injured were in critical condition. He said firefighters and policemen were among the injured. He urged all the doctors of the district to help in dealing with the situation and called for emergency blood donation.

It is not yet clear what caused the fire. Fire service officials said they suspected the fire may have started from a container of hydrogen peroxide and soon spread to other containers. Let us tell you, in 2020 too, an oil tank exploded at a container depot in Patenga area of ​​Chittagong, killing three people.